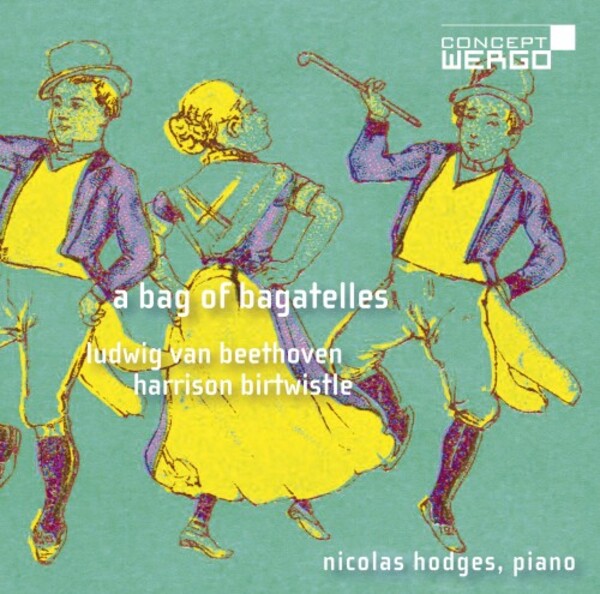 Beethoven & Birtwistle - A Bag of Bagatelles

Nicolas Hodges occupies a unique position among the worlds most distinguished piano soloists. His ability to perfectly perform unconventional, hyper-complex works of extreme technical difficulty is legendary, but he also possesses a deep musical understanding of the music he performs, which he often prepares in consultation and collaboration with the composers. Less well known but equally fascinating are his interpretations of the music of earlier centuries, in which he is always able to rediscover fresh and contemporary qualities.

On the occasion of the 250th anniversary of Ludwig van Beethovens birth, Nicolas Hodges has juxtaposed Beethovens music with works by the English composer Harrison Birtwistle (born in 1934). Discovering that the two composers have much in common, he reveals the contemporary potential still present in Beethoven and the parallels to be found in Birtwistles compositions, many of which were composed especially for Hodges. This studio recording was produced by the WDR in Cologne. Hodgess playing is radically contemporary, impulsive, and full of surprises and humour. Anyone expecting soothing background music should definitely look elsewhere!

Largely bereft of live performances, this Beethoven Year has nevertheless seen a huge number of celebratory releases online and on disc. You might think that record companies and performers had exhausted themselves: is there really anything new left to say about this ubiquitous composer? Every corner of his repertoire has been picked over, in performances ranging from historic archives to the latest trends in period performance. Yet there is still new light to be shone on this music, particularly when imaginatively programmed, and several discs this year have paired Beethoven with other composers, both dead and living, with varying levels of success.

Now, with the 250th anniversary of Beethoven's baptism just days away (the precise date of his birth is unknown), the Wergo label releases some of his shorter piano pieces in an unlikely but, as it turns out, hugely rewarding coupling. British composer Harrison Birtwistle's music is normally seen as having its roots in the Stravinsky, Varèse and also the medieval era (the use of isorhythm was prominent in some of his earliest works), as well as the art of Albrecht Dürer and Paul Klee among others. Yet Birtwistle himself has often used Beethoven as a reference point when commenting on his own music's supposed difficulties (for musicians and audiences), and both composers exhibit a rough-hewn toughness and resilience, as well as a ready wit. Birtwistle himself states that 'Beethoven never does what you think he's going to', and it's an observation that applies equally to his own music, which is full of unexpected twists, turns and tangents - what liner-note writer Tom Service, in his enthusiastic but tightly-argued booklet article, calls its 'never-ending state of discovery'.

Pianist Nicolas Hodges, a firm fixture on the contemporary music scene, is also a master of earlier repertoires, from Beethoven and Schubert to Berg and Stravinsky, so it's little surprise that he manages to present the programme on this disc with such confidence and commitment. He opens with Beethoven's rarely-heard but hugely revealing Fantasia in G major, op.77 (1809), a work whose freedom of form takes the Mozartian fantasia and turns it into a vehicle for what seems more like a stream of consciousness than any academically-defined template. There are wilder performances out there, but Hodges's relative coolness is hugely revealing in pointing up the essential modernity of this music, making it an ideal curtain-raiser for Birtwistle's Variations from the Golden Mountain (2014). The title is a reference to Bach's iconic Goldberg Variations (a work that, along with Beethoven, Birtwistle was immersing himself in as he wrote the piece); in fact, these taut, often impulsive, sometimes lyrical variations owe more to Beethoven than to the Leipzig cantor, unveiling a procession of strongly contrasting characters  a reminder of the theatrical element in so much of Birtwistle's output.

The Golden Mountain Variations in their turn serve as an ideal link to Beethoven's Six Bagatelles, op.126 (1824), which at the time of their composition took the art of the unexpected turn to new heights. Each one is a gem, and they receive exquisitely attentive performances from Hodges, one moment tender, the next explosive, with every harmonic inflection made to tell. It's a recording that easily holds its own with the best out there, full of life as well as stylishness, and it's followed by the other centrepiece on the disc, Birtwistle's Gigue Machine (2011). With its fanfare-like opening, interlocking clockwork cogs, moments of melancholic introspection and lyricism, and bursts of energy, this is one of the composer's most authentically pianistic works to date. But it also successfully captures the overwhelming physicality and colour of his best orchestral works, as if distilling the essence of such mighty pieces as The Triumph of Time and Earth Dances. An uninterrupted 15 minutes of technically and expressively demanding music, it receives a superb performance from Hodges that makes it the undoubted highlight of the disc.

He concludes with two miniatures: first, Beethoven's B minor Allegretto, WoO 61 (1821), a gift for a friend that's full of puns, canons and other musical jokes. It's exactly the sort of occasional piece at which Birtwistle, too, has shown himself adept over the years. Finally, Dance of the metro-gnome (2006) is a child's piece for piano and metronome (the performer is also required to vocalise and clap), a work any aspiring pianist could try at home, and a delightful note on which to end.

This is unquestionably one of the most interesting discs to have emerged from the Beethoven Year, and it's wholly appropriate that it's released so close to the anniversary itself. Even if you think you've had quite enough of Ludwig for 2020, you really should try to hear this! It's a veritable feast for all those with open minds and ears.

That sinewy quality certainly emerges in [Nicolas Hodges] performance of Gigue Machine, whose dizzyingly intricate patterns, constantly renewing themselves and taking off in unexpected directions throughout the 15-minute piece, constitute a formidable virtuoso challenge and generate perhaps the most authentically pianistic music that Birtwistle has ever composed, which is delivered by Hodges with total authority and clarity.  Andrew Clements
The Guardian 12 November 2020