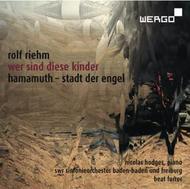 The piano work 'Hammamuth - Stadt der Engel', premiered at the Darmstadt Summer Courses in 2006, and the piano concerto 'Wer sind diese Kinder', premiered at the Donaueschingen Music Festival three years later, are two attempts which aim to broaden the spectrum of political music.

In 'Hamamuth - Stadt der Engel', the composer Rolf Riehm tries to react to the omnipresent violence experienced during the Iraq War. This is about prevailing perceptions. 'Stadt der Engel': They refer to the pictures of devastation in Iraq which can be regularly seen on TV  this is the beginning of Riehm's detailed introductory text which is incorporated in the score of the work.

In 'Wer sind diese Kinder', this approach is continued; the political is deeply engrained in the texture of Riehm's works, as a reflection on the omnipresence of international political conflicts.