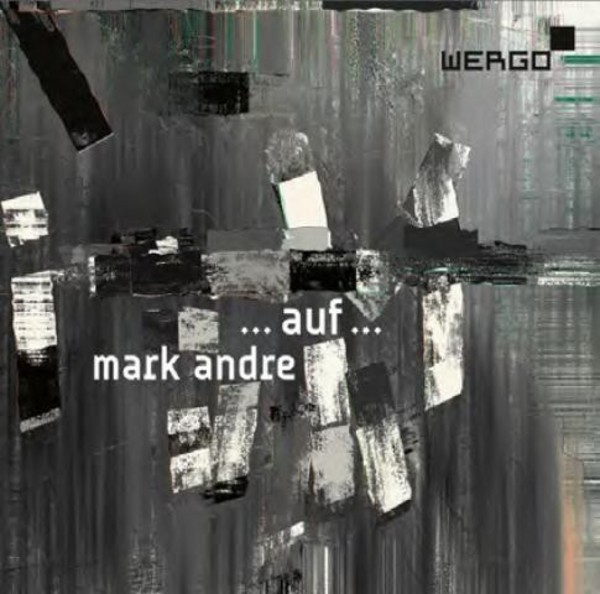 Mark Andres compositions '...auf...' [...on...] are three independent orchestral pieces. Taken together, they can be heard as a cycle or as a triptych, like a three-part altarpiece. Though they are related, each work begins again the search for new resonances and means for transitions between sounds.

'...auf...1' begins with a sustained and spherical sound of the strings. Later the band of sound is invaded by short impulses of the other instruments: the harps play with plectrums while the cellists and double-bass players briefly tap with their fingertips on the resonating bodies of their instruments, the trumpets whistle, and the horn players tap on their mutes with the palms of their hands. Two essential elements of the piece are a short, impulsive attack of a sound, on the one hand, and its resounding and fading away over a long period of time, on the other hand.

In '...auf...2' at first two pianos present a dialogue of short events, rich in accents and colours, before the other orchestral instruments join in. Harmonious, inharmonious, and noise-like sounds are juxtaposed to each other. Compared to '...auf...1', the orchestral instruments in this piece move even more strongly into strange  sometimes metallic and technical, sometimes surreal  spheres of sound. Here too, the sonorities coalesce into short impulses and long bands of sound.

For the orchestral layout of '...auf...3' the percussion section is expanded to six players positioned around the audience. In addition, a sampler keyboard is supposed to be on the stage as well as live electronics with loudspeakers surrounding the audience. The live electronics follow a precise plan as to when which sounds of the orchestra are to be reproduced additionally from which loudspeaker. A special program for electronic sound transformation permits the so-called 'convolution' of two different input signals: this makes it possible to connect the attack of one instrument with the resonance of another. A drumbeat can for example produce the resonance of a piano, or a string pizzicato can become a sustained flute sound. In the course of composing '...auf...3', the use and implementation of this still-quite-young process was pioneering work for the participating sound engineers and the composer.