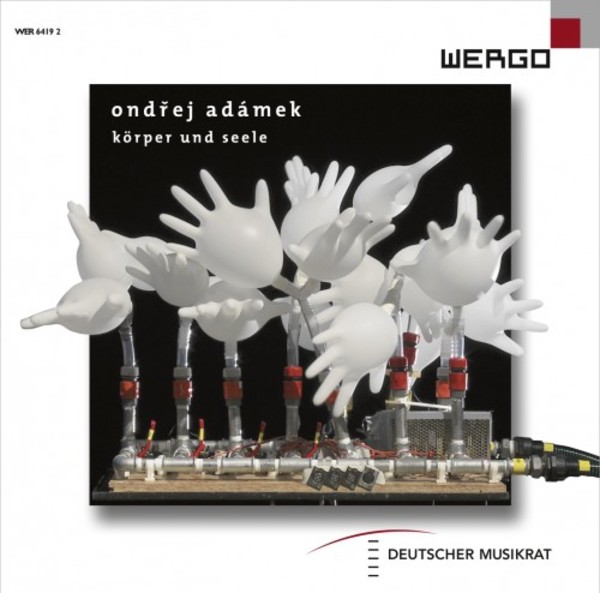 Rich in tone colours and tonal language, bursting with energy and yet shaped in a subtle and sophisticated way: this is what constitutes the music of composer Ondřej Adámek displayed on his portrait CD and DVD of the Edition Zeitgenössische Musik.

Adámek, who grew up in Prague and currently lives in Berlin, developed an interest in the music and instruments of other cultures at an early stage and let his impressions and experiences inspire his compositions. Bernd Künzig, author of the CDs booklet, thus calls Adámeks compositional style a sort of linguistic and musical bricolage: Virtually his entire output is pervaded by hybrid forms in which the natural is confronted with the artificial and mechanical, rituals with abstraction, and conflicting languages (including musical languages) with each other, all for the purpose of producing his own distinctive blend.

Language, especially its phonetic and noise-like qualities, plays a key role in many of Adámeks works. In the three choral pieces of the portrait CD, Polednice, Körper und Seele and Kameny, language, its rhythm and the timbres of vowels and consonants become the structuring principle. Here Adámek draws special inspiration from the texts and poems of Icelandic artist Sjón, whom he met during his residency with the DAAD Artists-in- Berlin programme.

The interpreters, among them the Ensemble intercontemporain, the SWR Vokalensemble Stuttgart and the Deutsches Symphonie-Orchester Berlin, are nearly always supposed to exceed the boundaries of their own instrument or their voice: in the choral works the singers have to generate sounds with whistles, party noisemakers, sirens, percussion instruments and other noisemaking objects, whereas in Dusty Rusty Hush the orchestra itself turns into a huge machine, pounding, groaning, screeching and thus resurrecting an abandoned steel plant in Brandenburg.