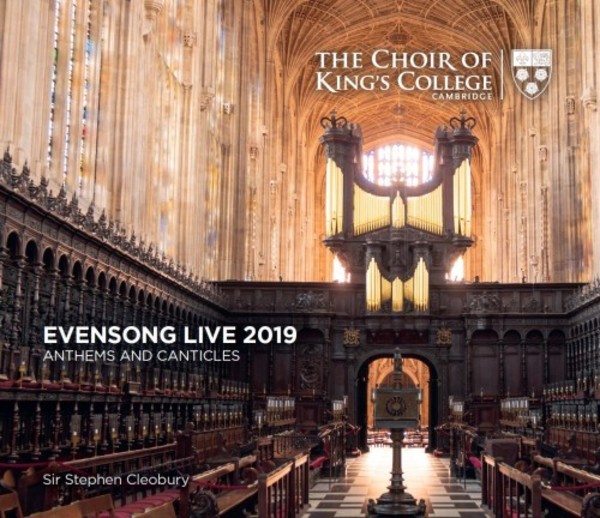 A Prayer of King Henry VI

One foot in Eden still, I stand

» Magnificat
I was glad

Magnificat and Nunc Dimittis in A flat major, op.65

The Choir of Kings College, Cambridge

A Prayer of King Henry VI

One foot in Eden still, I stand

» Magnificat
I was glad

Magnificat and Nunc Dimittis in A flat major, op.65

The Choir of Kings College, Cambridge

The third release in the popular Evensong Live series from the Kings Colleges own label. A celebration of British choral music featuring popular pieces such as I was Glad by Hubert Parry.
For more than half a millennium, Kings College Chapel has been the home to one of the worlds most loved and renowned choirs. Since its foundation in 1441 by the 19-year-old King Henry VI, choral services in the Chapel, sung by this choir, have been a fundamental part of life in the College. Through the centuries, people from across Cambridge, the UK and, more recently, the world have listened to the Choir at these services. Today, even people who arent able to attend services in the Chapel have heard Kings Choir, thanks to its many recordings and broadcasts, and the tours that have taken it to leading international concert venues around the world. Despite its deep roots in musical history, the Choir has always been at the forefront of technological innovation, and records exclusively on its impeccable own label.
Only the most jaded of observers fails to enjoy the sight of a crocodile of small boys in top hats and high white collars making their way through the grounds of Kings College. Known to us as the croc, this is the voyage made five days a week by the Choristers from our school half a kilometre up the road to Chapel. They come in all weathers during the 8-week University term, muffled up against the cold of winter in thick scarves, in good time to begin the rehearsal for Evensong.

Meanwhile the Choral Scholars, the students (usually undergraduates) who sing the alto, tenor and bass lines in the Choir, are making their own individual way to Chapel. Some will be hot-footing it from lectures, others from the library, others from their rooms where they might well have been learning the music to be sung that evening.