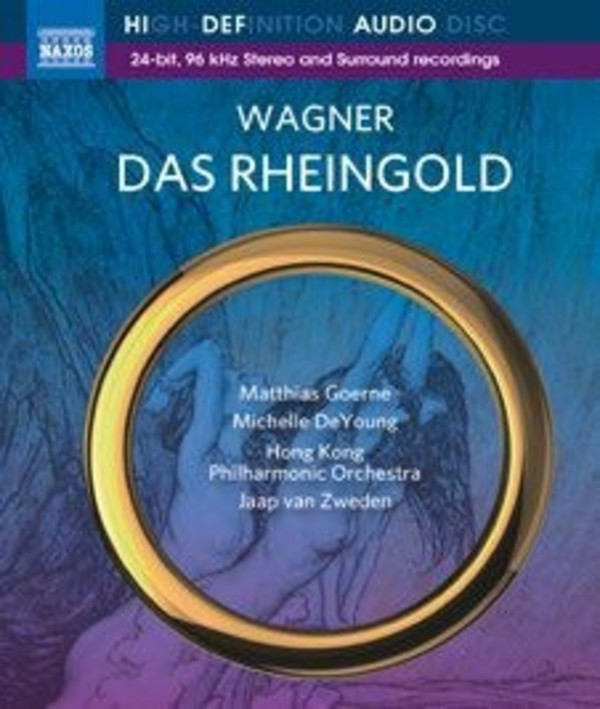 First performed as a cycle of four operas in 1876, Wagners visionary Der Ring des Nibelungen (The Ring of the Nibelung) is one of the greatest works of art. Centred around a ring which offers its bearer ultimate power and the attempts of various people to acquire it, the Ring cycle explores the relationship between love and earthly power and the themes of yearning and loss, all within a setting of medieval legend. The Prologue Das Rheingold depicts the theft and subsequent surrender of the ring forged from the Rhinemaidens gold by the Nibelung dwarf Alberich.

Recorded in January 2015 live in concert at the Cultural Centre in Hong Kong.

Wagners Ring Cycle is at the pinnacle of our art form. Bringing it for the first time to the Hong Kong Philharmonic, and working together with the orchestra on this great music, will be a central pillar of my tenure as Music Director. I am thrilled that this first installment, Das Rheingold, has been so faithfully and beautifully captured by the recording team. This release will serve as a document of a cast which would be the envy of any stage in the world, and of a great orchestra, making thrilling music together.  Jaap van Zweden

The Hong Kong Philharmonic Orchestra is now regarded as one of the leading orchestras in Asia. With a history stretching back to 1895, it became fully professional in 1974. Its annual schedule of activities focuses on the great symphonic repertoire, and also includes commissions of new music, pops concerts, opera (staged and in concert) and a very extensive education, outreach, and community engagement programme. Since Jaap van Zweden became Music Director in 2012, the orchestra has toured to various cities in China, to Taiwan, and to Europe, the highlight of which was the filming of a sold-out concert from the Musikverein hall in Vienna. In addition to recordings for Naxos featuring Tan Dun and Bright Sheng, each conducting their own compositions, the orchestra is recording for Naxos the first-ever performances by a Hong Kong or mainland Chinese orchestra of Wagners four-opera cycle The Ring of the Nibelung.
Sound format: HD 24-bit, 96 kHz PCM