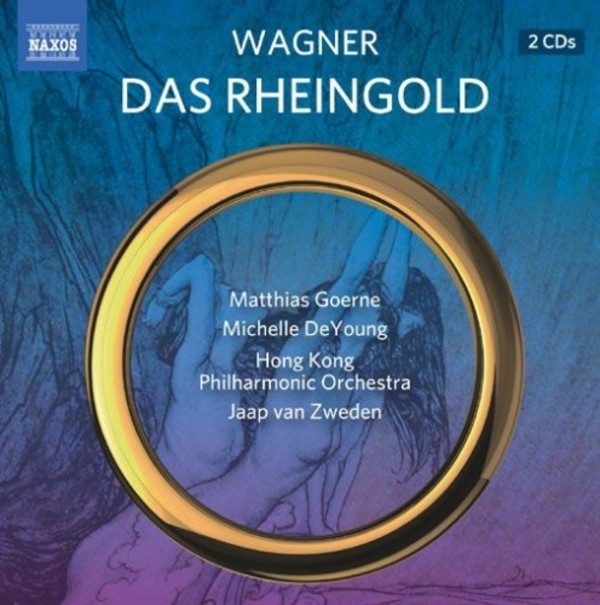 First performed as a cycle of four operas in 1876, Wagners visionary Der Ring des Nibelungen (The Ring of the Nibelung) is one of the greatest works of art. Centred around a ring which offers its bearer ultimate power and the attempts of various people to acquire it, the Ring cycle explores the relationship between love and earthly power and the themes of yearning and loss, all within a setting of medieval legend. The Prologue Das Rheingold depicts the theft and subsequent surrender of the ring forged from the Rhinemaidens gold by the Nibelung dwarf Alberich.

Recorded in January 2015 live in concert at the Cultural Centre in Hong Kong.

Wagners Ring Cycle is at the pinnacle of our art form. Bringing it for the first time to the Hong Kong Philharmonic, and working together with the orchestra on this great music, will be a central pillar of my tenure as Music Director. I am thrilled that this first installment, Das Rheingold, has been so faithfully and beautifully captured by the recording team. This release will serve as a document of a cast which would be the envy of any stage in the world, and of a great orchestra, making thrilling music together.  Jaap van Zweden

The Hong Kong Philharmonic Orchestra is now regarded as one of the leading orchestras in Asia. With a history stretching back to 1895, it became fully professional in 1974. Its annual schedule of activities focuses on the great symphonic repertoire, and also includes commissions of new music, pops concerts, opera (staged and in concert) and a very extensive education, outreach, and community engagement programme. Since Jaap van Zweden became Music Director in 2012, the orchestra has toured to various cities in China, to Taiwan, and to Europe, the highlight of which was the filming of a sold-out concert from the Musikverein hall in Vienna. In addition to recordings for Naxos featuring Tan Dun and Bright Sheng, each conducting their own compositions, the orchestra is recording for Naxos the first-ever performances by a Hong Kong or mainland Chinese orchestra of Wagners four-opera cycle The Ring of the Nibelung.

Two new Rheingolds in the space of a month? Things are looking up for Wagnerians with insatiable appetites! Hot on the heels of Simon Rattle's live concert account with the Bavarian Radio Symphony Orchestra in Munich comes the beginning of a new budget cycle to be released on Naxos over the next four years, from Jaap van Zweden and his Hong Kong Philharmonic Orchestra. Like the Rattle, it's taken from concert performances but has enough atmosphere about it to pack a dramatic punch too.

Van Zweden takes a measured view of the opening scene: this is the Rhine in broad flow, but thanks to the transparency of the orchestral playing, it never once sounds bogged down. The Hong Kong Rhinemaidens may sound less youthful than their counterparts on the Rattle recording, but they have more character  no bad thing when dealing with Peter Sidhom's throughly malevolent Alberich. His may not be the most subtle reading of the role on disc, but he certainly gets right under the character's skin. His cry of desperation when the golden ring is finally snatched from his grasp by Wotan is spine-chilling, while his following curse  one of the crucial moments of the entire cycle  is all the more powerful for being played (and sung) relatively straight.

Alongside Alberich, any performance of Das Rheingold stands or falls on the calibre of Wotan, troubled head of the gods, and Loge, the god of fire. Here the Hong Kong performance has it in spades. The veteran tenor Kim Begley is a Loge of many years' experience, and he gets the most out of this central role without resorting to caricature. In Matthias Goerne, the Naxos set boasts one of the finest and most interesting Wotans in recent memory. Bringing a Lieder singer's sensibility to the text, he also has immense vocal richness and authority, so that  whatever his moral torments  the listener is left in no doubt as to his godly status. His performance culminates in a thrillingly delivered 'So grüss' ich die Burg' as he leads the gods into the newly-built Valhalla. With these three singers, the confrontations between Alberich on the one hand and Wotan and Loge on the other in Scenes 3 and 4 take on a compelling momentum.

Of the supporting cast, David Cangelosi is excellent as Alberich's whimpering brother Mime, Michelle DeYoung makes a fine impression as Wotan's imposing wife Fricka, and Deborah Humble is an authoritative yet mysterious Erda, the earth goddess. Powerfully-voiced bass Kwangchul Youn makes a highly sympathetic case for Fasolt, the more sensitive of the two giants, while as his brother Fafner, Stephen Milling is more conventionally villainous.

The Hong Kong Philharmonic may not have the sheer heft of some of its better known international rivals, but under Jaap van Zweden it plays with enormous sensitivity and, where necessary, power. Textures are always clear without feeling spotlit, and the vocal-instrumental balance is ideal. Of the orchestral set-pieces, the transformation scenes down into and up out of the caverns of Nibelheim  complete with anvils  and the final entry into Valhalla are as fine as any you'll hear on disc.

The accompanying booklet contains a detailed synopsis (with track references) by Keith Anderson, and a free online libretto is also available. Much more than the sum of its parts, this is a hugely impressive start to a Ring cycle that should attract both the seasoned Wagnerian and the impecunious newcomer, and we look forward to Die Walküre in a year's time!