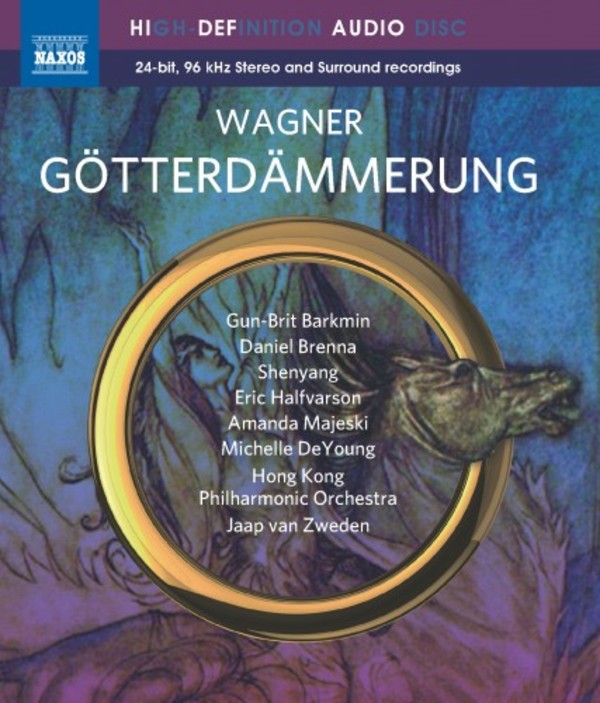 Götterdämmerung (Twilight of the Gods) is the epic fourth and final opera of Wagners great Ring cycle, with a plot that depicts the fall of heroes, gods, and the entire world. As ever with the Ring, the joys of love are all too fragile and fleeting, and the drama of Götterdämmerung revolves around dark and unsettling reversals of fortune and illusions of hope that synthesise thrilling and powerful grand opera traditions with Wagners revolutionary techniques. Containing all of the Rings essential elements, Götterdämmerung possesses a profoundly satisfying sense of inevitability that makes it both a towering climax and a unified summation of the Rings abundant variety.

The German-born soprano, Gun-Brit Barkmin, is noted for her exciting portrayals of some of operas most complex leading ladies and has a strong association with the repertoire of Richard Strauss including Salome, Chrysothemis (Elektra) and Ariadne (Ariadne auf Naxos). Boasting an impressively diverse repertoire, she has appeared as Jenůfa at the Komische Oper Berlin, Regan in Reimanns Lear at the Salzburg Festival, and Elena in the world premiere of Sotelos El Público at the Teatro Real in Madrid.

Götterdämmerung brings to a conclusion our Wagner Ring Cycle conducted by Jaap van Zweden with the Hong Kong Philharmonic Orchestra. As with the other releases in this edition, it will appear both on standard CD and Blu-ray formats.

Previous releases in this cycle have been received with great critical acclaim. Das Rheingold (866037475): The quality of the orchestral playing is remarkable The cast is uniformly strong, and the audio quality is superb.(ClassicalCDReview.com); Die Walküre (866039497): Van Zweden seems to respond more naturally to this richer, more passionate score, better suited to his sweeping approach. Drawing airy, luminescent textures from the Hong Kong players, he drives the drama excitinglyavoiding Pierre Boulezs glibness and the lumpen Teutonicism currently reigning at Bayreuth. (BBC Music Magazine)

The Blu-ray editions of this cycle have also been widely acclaimed. Die Walküre (NBD0051), was reviewed in The Guardian as thrillingly vivid easily maintains the high standard and promise of Das Rheingold (NBD0049). Siegfried (NBD0069A and 8660413-16) the penultimate opera in the cycle appeared in November 2017, with the American Record Guide complimenting conductor Jaap van Zweden as a master of refinement and tonal balance. The Hong Kong Philharmonic plays with lush brilliance, beautiful portamentos in the strings, and exceptional transparency that allows Wagners motifs to interweave seamlessly with the vocal lines, as the composer intended. Whats more, he relishes the scores playful qualities as much as its grandeur, making Wagners long musical journey feel livelier than usual.
Sound format: 24-bit, 96 kHz PCM Surround