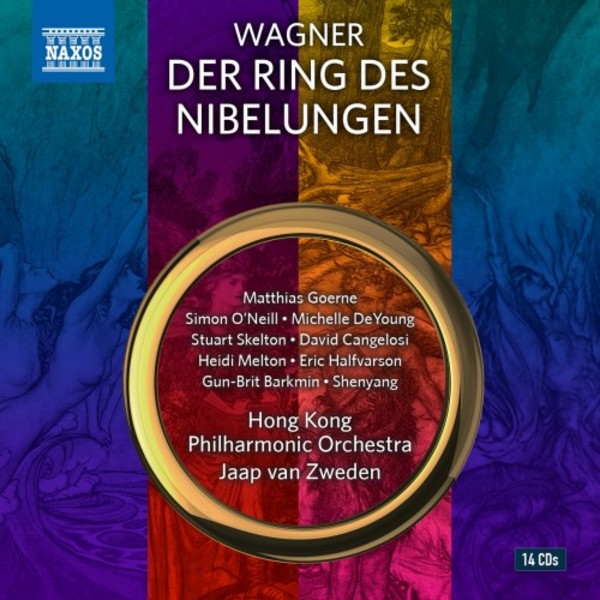 Wagners visionary Der Ring des Nibelungen (The Ring of the Nibelung) was first performed as a cycle of four operas in 1876. Its mythic plot examines the relationship between love and earthly power through the agency of a ring which confers ultimate power on its bearer. One of the most sustained and remarkable achievements in all music, the tetralogy is performed by an all-star cast, conducted by the new music director of the New York Philharmonic Orchestra, Jaap van Zweden, in performances that have been critically acclaimed worldwide for their thrilling sense of drama (The Sunday Times, London).

Gramophone wrote about the project: Naxoss engineers continue to gain a mastery of Wagners orchestra/cast balance in the citys Cultural Centre Concert Hall. American Record Guide also wrote: Van Zweden is a master of refinement and tonal balance. The Hong Kong Philharmonic plays with lush brilliance, beautiful portamentos in the strings, and exceptional transparency that allows Wagners motifs to interweave seamlessly with the vocal lines, as the composer intended.

All-star international Wagner cast with Stuart Skelton as Siegmund in Die Walküre, who won the 2014 International Opera Awards for Best Male Singer, and was selected as one of the 20 Greatest Wagner Singers of all Time by Australias Limelight Magazine.

Matthias Goerne was awarded the 2018 Prix Bayreuth from the Académie du Disque Lyrique for his performance of Wotan in Die Walküre, and adjudged by the Academy The Best Performance on a Wagner Recording.

Michelle DeYoung is a multi-GRAMMY® Award-winner and a regular performer at the Met in New York.