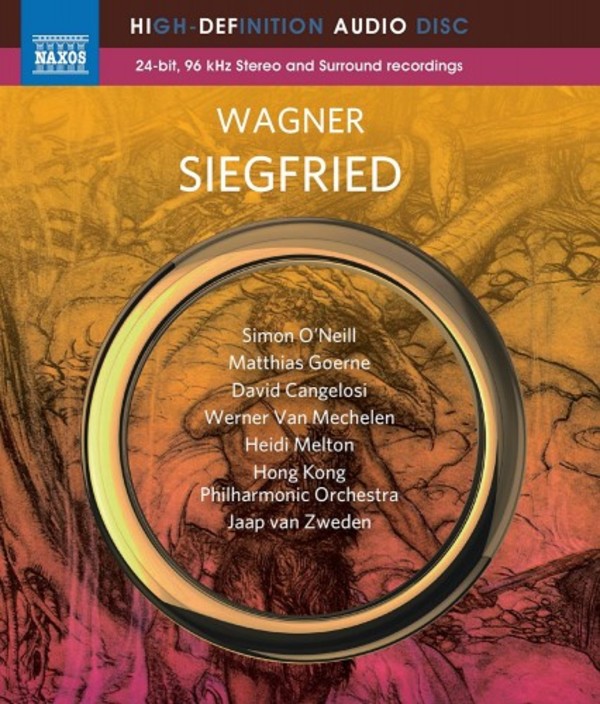 Der Ring des Nibelungen (The Ring of the Nibelung) is one of the most remarkable achievements in all music, and Siegfried, the third in the cycle, contains some of the greatest moments in Wagners entire output. Wagner conceived Siegfried as a heroic man of the future, and his fantastical tale is one in which the human dramas of treachery and violent struggles for power become magnified in a world of gods, dragons and magic. The previous opera in this cycle, Die Walküre (Naxos 866039497), was acclaimed in The Guardian as thrillingly vivid easily maintains the high standard and promise of Das Rheingold (Naxos 866037475).

This is the third and penultimate release in our acclaimed cycle of Wagners Der Ring des Nibelungen with the Hong Kong Philharmonic conducted by Jaap van Zweden. As with the others in this series it is released both on CD and Blu-ray Audio.

Of the star cast for Siegfried, Matthias Goerne has been singled out for particular praise by the critics, with Gramophone stating that he sings Wotan beautifully, with much baritonal sophistication, predictable (from an experienced Lieder recitalist) care for words and able negotiation of trickier moments. Opera News wrote Matthias Goerne is a revelation [he] upholds the great tradition of Wagner singing.

Each member of this carefully selected cast has an established reputation in opera performance, and most are known for significant and highly demanding Wagnerian roles. These include tenor Simon ONeill as Siegfried, one of the finest heldentenors on the international stage, and soprano Heidi Melton as Brünnhilde, who has been called the Wagnerian voice we have been waiting for since Flagstad and Nilsson (La Presse).

A native of New Zealand, Simon ONeill has established himself as one of the finest Heldentenors on the international stage. He is a principal artist with the Metropolitan Opera, the Royal Opera House Covent Garden, Teatro alla Scala and both the Bayreuth and Salzburg Festivals. Simon ONeill is an alumnus of the University of Otago, Victoria University of Wellington, the Manhattan School of Music and The Juilliard Opera Center. He is a Fulbright Scholar, was awarded the 2005 Arts Laureate of New Zealand and was a grand finalist in the 2002 Metropolitan Opera National Auditions, returning as guest artist in 2007. He sang the role of Waldemar in Schoenbergs Gurrelieder at the 2017 BBC Proms with the London Symphony and Sir Simon Rattle.