In praise of... Weber 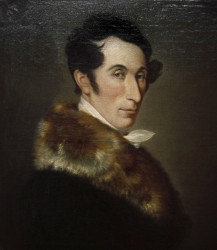 The big musical anniversaries tend to revolve around composers births and deaths: the centenary of Debussys death was marked in 2018; last year (just in case you missed it) saw Beethovens 250th birthday celebrated more by recordings than by the jamboree of live performances originally planned; and this year marks 50 years since the death of Stravinsky, and 500 years since that of Josquin Desprez. Occasionally, however, individual musical works of landmark significance are celebrated: the centenary of Wagners epic Ring cycle was marked in 1976 by the controversial Boulez-Chéreau production (now itself regarded as a classic), and in 2013 one could barely move for recordings and live performances marking the 100th anniversary of the premiere of Stravinskys The Rite of Spring.

18 June 2021 marks the bicentenary of Carl Maria von Webers operatic masterpiece Der Freischütz, a work which, with its lively combination of folk milieu, fantastic sorcery and stage effects, brilliant orchestration and exuberant melodic invention, played a crucial part in the development of German Romantic opera at a time when Italian opera still overwhelmingly held sway with audiences. Following its Berlin premiere, it soon took first Germany and then the whole of Europe by storm, and became a perennial staple of the repertoire in German opera houses large and small.

Nothing in Webers earlier output quite prepares one for Der Freischütz. He was born in 1786 into a touring theatrical family, but his particular musicality was evident from early on. His musical education was inevitably of a fragmentary nature, yet his teachers included Michael Haydn and Abbé Vogler. He was most accomplished at the keyboard, but he also played the guitar, and the theatrical bug remained with him throughout his tragically short life. At the age of just 17 he was appointed director of the Breslau (now Wrocław) Opera, but an enforced absence saw his reforms there (mainly based on the works of Mozart) undone. His own earliest operatic efforts survive in only fragmentary form, but by the time of the Singspiel Abu Hassan (1810-11), for all its clear influence of Mozarts Die Entführung aus dem Serail, he was beginning to find an individual voice. Two highly effective symphonies date from a period spent in Karlsruhe in 1806-07, but it was a longer period of non-theatrical activity as a touring piano virtuoso that saw the composition of his two piano concertos, as well as the Concertino and two concertos for the celebrated clarinettist Heinrich Baermann, which to this day remain central works in the clarinet repertoire.

Apart from Der Freischütz, 1821 also saw the composition of the F minor Konzertstück, which launched the Romantic vogue for the single-movement, multi-section concertante work for solo piano and remained a favourite with pianists well into the twentieth century. Webers later operas, the grand heroic-romantic Euryanthe (Vienna, 1823) and Oberon, or The Elf Kings Oath (London, 1826), though dramatically flawed, contain some of his finest music, and are well worth investigating further, as are his songs, including Die Temperamente beim Verluste der Geliebten (1816), one of the earliest song-cycles.

Webers health, always fragile, suffered a fatal turn as he prepared to travel home to Dresden (where he had directed the opera since 1817) from London, after personally conducting the premiere run of Oberon at Covent Garden, and he died on 5 June 1826, some five months short of his fortieth birthday. His life may have been brief, but his influence was enormous: his brilliance as an orchestrator alone had a huge impact on both Berlioz and Debussy, while his influence on the development of German Romantic opera (and on Marschner and Wagner in particular) was enormous. More widely, his influence was felt by composers as diverse as, Mendelssohn and Chopin, Meyerbeer and Mahler, Stravinsky and Hindemith.

Two centuries on, Der Freischütz remains a much-loved favourite of the German operatic repertoire, with notable recordings ranging from Furtwängler, Keilberth and Jochum to Kubelík, Carlos Kleiber (whose father, Erich, was a notable Weber champion) and Harnoncourt. Yet for those wishing to explore further, there is so much more to Weber than Der Freischütz alone: the concertante clarinet works are an excellent place to start, while both Euryanthe and Oberon are available on disc, if rarely performed (even pre-COVID) in the opera house. The piano concertos have enjoyed something of a renaissance in recent years, while the songs, which crop up individually from time to time, were the subject of a groundbreaking 1976 recording by tenor Martyn Hill with the late Christopher Hogwood at the fortepiano, now available on Australian Eloquence. Wherever you choose to dip in, you will find Webers life and output eminently deserving of celebration.

To their admirers they are objects of fascination and even veneration, collectible to the point of addiction, while to detractors they are incomprehensible, fatally flawed by inadequate sound quality and mannered, often wayward interpretative traits. Today, with more examples than ever easily available (though with an annoying habit of often being out of the catalogue just when you want a particular one!), historical recordings are big business for such a niche market. Vastly improved techniques of sound restoration and... read more