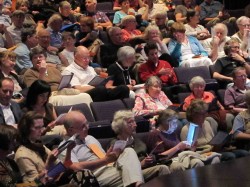 Most people who have been to live classical music events will, at some point or other, have given thought to what to wear. For some, it is one of the main attractions of attending such happenings; for others, an incidental annoyance; for others still, almost a non-issue. On the whole, British audiences are fairly relaxed about what they wear for an evening in the concert hall or at the opera or ballet  unless, that is, its not an opera but an Opera (such as Tosca, La Bohème or La Traviata) that is being performed, in which case (perhaps because a different sort of audience with different expectations is attracted) no expense is too great, be it M&S, Peacocks or Matalan. People may still dress down for concerts of new music, but beards and sandals are no longer obligatory for early music events. On weekdays, many audience members will pitch up in what they have been wearing at work following a hastily grabbed pint or a bite to eat. Famous the world over for their unique sensitivity to fashion, the magnificently crumpled British concert-going public know how to do things in style.

In the States, at least for symphony concerts and opera, sartorial appearance is taken rather more seriously than it is by the Brits, particularly where prestigious subscription series are concerned. Thankfully, however, the worst excesses of the Dallas-era are now history, and the resulting absence of outrageously large shoulder-pads and hairdos has thereby substantially improved sight-lines (and possibly acoustics as well).

Yet for real elegance one must, of course travel to continental Europe, where the French above all have mastered the art of smart casual, with infinitely subtle gradations of (in)formality depending on the context: chamber and solo recitals, choral and orchestral, opera and ballet, early or modern. One wonders, after all the care the average French audience member appears to take over their appearance, that they have any mental energy left to attend to the music itself. Yet their Third Empire and Belle Époque forebears would surely be proud of such a community which is often better dressed than the musicians themselves (particularly if said artists are non-French). As Descartes almost put it, Vestio, ergo sum.

As one travels further east, things turn somewhat more formal: German and especially Austrian audiences are more likely to wear suits and dresses to solo and chamber recitals as well as larger-scale events. This is partly a reflection of the more widespread uptake of subscription systems, which are largely the domain of an older demographic  evidently with more time to spend in preparation before going out (or at least, so the preponderance of blue rinse perms would suggest). Some audience members even sport bow ties with their suits, although the practice occasionally seen of wearing evening dress to matinee performances betrays poor breeding and risks confusion with the performers or even the waiters. (A particular bugbear of the Spin Doctors is the fashion  more widespread in the US than elsewhere, particularly at awards ceremonies  of wearing a long black tie with an evening suit. This results in the Quentin Tarantino look, which may induce anxiety in fellow audience members, and should be avoided at all costs. There are essentially two types of black-tie events: evening/celebratory  including country-house operas  and funerals. They should not be confused.)

Another charming feature of central European concert audiences is the occasional but regular sight of children dressed in miniature formal wear, although whether this practice is voluntary or enforced is never entirely clear. Certainly it helps bring down the average age of the audience to something nearer 70 than 80, although the development of a generation of Mini-Mes à la Austin Powers could be seen as a cause for concern. At any rate, if you are going to try out this appearance on your children or grandchildren, be advised that immaculate behaviour is not only essential but also very possibly the only option for the poor little mannequins when trussed up in an undersized suit or frock.

Most magnificent, however, are the Czechs, who take their concert- and opera-going Very Seriously Indeed. To attend a classical performance in the Czech Republic and other countries in East-Central Europe is to travel back in time. Sequined gowns, permed and hennaed hair, high heels, dicky bows and even patent leather shoes are profusely in evidence; use of the extensive cloakroom facilities (by which we mean the actual cloakrooms, not a euphemism for the loos) is not merely advisable but obligatory, on pain of being refused admittance to the concert itself. (Contrast this with the average British concertgoer, their windcheater folded awkwardly on their lap, or stuffed unceremoniously under the seat, where it and any accompanying handbags offer extra insulation for the toes of the person sat behind.) The reason for all this formality becomes clear at the interval, when row upon row of readily-prepared martinis and other cocktails lie alongside elegant canapés of the sort most of us will only have glimpsed as serving suggestions on food packaging. (Compare this with the typical British scrum for a quick G&T or a tub of overpriced ice cream.)

The other thing the Czechs seem to adore (or at least expect) is Very Long Speeches at the end of the concert. So, however formally youre dressed, do make sure its comfortable: remember, youre in this for the long haul. Such events are not merely performances but Occasions. (Again, by way of contrast, Brits come ready-dressed for comfort rather than appearance, their clothes already moulded inextricably around them even before they take their seats. Yet they rarely get Very Long Speeches to endure/enjoy, and almost never at the conclusion of an evenings entertainment, when theres another mad rush to catch the last train home or get to the pub before closing time.)

One thing to remember whatever the occasion is never to dress too drably. The Spin Doctor once made this mistake at a French theatre whose name we shall omit here to avoid embarrassment (Reims). Sporting a black long-sleeved polo shirt of the type habitually favoured by the late Pierre Boulez, as well as a pair of plain dark-grey lounge suit trousers and dark shoes, he was duly mistaken for a member of the front-of-house staff. Still, better that than the ghastly dark-green velvet jacket he was forced to don when doing time in the 1980s as an usher at a London theatre which shall likewise remain anonymous (ENO, London Coliseum). After years of dining in the backstage canteen, the aforementioned jacket was boiled down to make a delicious soup

All audiences, stereotypes, and incidents mentioned in this article are fictitious. No identification with actual audiences (living or deceased), stereotypes, incidents, places buildings, or products is intended or should be inferred.

The original research behind this article is entirely anecdotal. It relates exclusively to pre-Covid concert attire; we hope to bring our readers an update on trends in facial attire in a future fashion supplement, following a period of similarly fastidious, ground-breaking research.