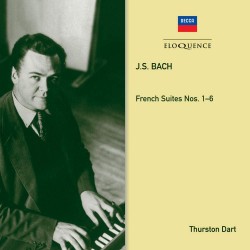 Among this years musical anniversaries and super-anniversaries (ranging from Stravinsky, Mario Lanza and Astor Piazzolla to Jan Pieterszoon Sweelinck and Josquin des Prez), one particular name carries special resonance for British early music lovers. 2021 marks both the centenary of the birth and 50th anniversary of the death of Robert Thurston Dart (3 September 19216 March 1971). Known professionally simply as Thurston Dart (and Bob to his friends and colleagues), he was an enormously influential performer and academic in the post-war early music revival who counted among his mentees and students such big names as David Munrow, Christopher Hogwood, Michael Nyman, Davitt Moroney and John Eliot Gardiner.

Darts own musical journey started at Hampton Grammar School, barely a stones throw from his birthplace in Surbiton, Kingston-upon-Thames, and he was a chorister of the Chapel Royal, Hampton Court, where he caught the attention of Edmund H. Fellowes, the leading inter-war authority on the madrigalists of the 16th and 17th centuries. By 1936 the young Bobbie had already made his debut broadcast (on BBC Radios Childrens Hour) in a programme of Elizabethan songs, and in 193839 he studied keyboard instruments at the Royal College of Music (including harpsichord with Arnold Goldsborough) before studying Mathematics at Exeter.

Graduating in 1942 (the same year he took the ARCM in piano accompaniment), he then entered war service as a junior scientific officer (and subsequently statistician and researcher) in the RAF, and while convalescing from a November 1944 crash in Calais he first met the young Neville Marriner (the beginning of a lifelong friendship). The decisive musical influence of this period, however, was his year of study with the Belgian musicologist Charles van den Borren, himself an expert on early English keyboard music. This, more than anything else, shaped Darts future career as both performer and academic, and his continued preoccupation with the nascent discipline of early music.

On his return to England in 1946 Dart began a career as a harpsichordist, and the following year he was appointed assistant lecturer in music at Cambridge University. He became a full lecturer in 1952, and fellow of Jesus College a year later. From the late 1940s onwards he was a prolific author of scholarly articles on (mainly English) early music, as well as producing important editions of Morley, Purcell, John Bull, and many of the great French Baroque clavecinistes.

Alongside these editions, Darts chief published legacy was his book, The Interpretation of Music (London, 1954, revised 1960 & 1964), which contains still surprisingly relevant questions for would-be editors, performers and even audiences, succinctly framing the main problems in the field of early music, usefully summarising some of the many issues surrounding sonority and extemporisation, and covering a series of periods in music history in reverse order, from the eighteenth century back to the Middle Ages. The Interpretation of Music has been required reading for several generations of music students, and although the language in which it is couched and some of the assumptions it reaches are occasionally anachronistic, Darts writing remains engaging and clearly-focussed, whether discussing the Classical, Baroque, Renaissance or Medieval repertoires, and prophetic of many trends that were not to take full root until after his death.

In 1952, when the conductor Boyd Neel moved to Toronto, Dart took over the direction of the former Boyd Neel Orchestra  renamed as the Philomusica of London  with whom he remained until 1959. A short-lived and turbulent stint as professor of music at Cambridge (196264) was succeeded by a happier period as King Edward Professor of Music at the University of London (succeeding Herbert Howells), where he radically redesigned the music degree syllabuses at Kings College, London, engaging an entirely new faculty. By this final chapter of his life, his association with Louise Dyers Éditions de lOiseau-Lyre had already led to several notable recordings by his Philomusica of London as well as solo discs, and this association continued after Dyers death in 1962, and the labels later acquisition by Decca.

Among Darts more remarkable recordings were the lOiseau-Lyre series Masters of Early English Keyboard Music, and his performance on a Goff clavichord of Bachs French Suites, recently reissued by Eloquence Classics. Darts command of nuance on the clavichord, with its exquisitely intimate tone and ability to vary the intensity of sustaining vibrato, remain a source of delight some six decades on. So, too, do his controversial theories on the early versions of Bachs Brandenburg Concertos as realised by the Academy of St Martin in the Fields on Philips in 1971 (Dart died before the recording  now regrettably out of the catalogue  was complete), including Barry Tuckwell on horn (!) in the Second Concerto, a fully-inserted Adagio movement for the Third, and David Munrow and John Turner on sopranino recorders in the Fourth. Also long overdue a reissue on CD is one of Darts own favourite among his recordings, featuring music by Froberger, again on the clavichord.

The reappearance of several of Darts recordings on Eloquence Classics has given his posthumous reputation a timely boost, even though some of the performances (particularly of the ensemble and consort works) now themselves sound distinctly dated and rather heavy-toned. His own clavichord recordings are perhaps still the best point to start. But it is the list of those eminent musicians and scholars he taught and inspired  including, in addition to the above-mentioned, such names as Philip Brett, David Fallows, Nigel Fortune, Peter Holman, Peter Le Huray, Stanley Sadie and Peter Williams  that secures his legacy. A typical act of kindness  allowing the young David Munrow to borrow a crumhorn in Cambridge  itself surely helped to change the course of the early music revival in Britain; and Darts robust yet informed and cultured determination to question the status quo should remain a prerequisite for scholars, performers and audiences alike.

A Question of Identity

Identity matters. All of us are defined (in our own eyes and those of others) by a variety of factors: where we come from (family, social and economic status, cultural, national and religious background, nationality and geographic location), what we do (job, leisure, personal relationships and commitments) and what we aspire to (what wed like to be, and also what we hope or try not to be). Identity is also important to groups (political, professional, amateur, sporting, cultural, activist), and is significant even to... read more