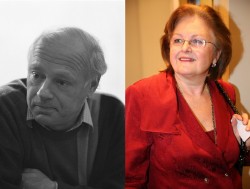 The greatly respected Dutch conductor Bernard Haitink passed away on 21 October at the great age of 92, just two years after stepping down from the podium. His last concerts, at the head of the Vienna Philharmonic in London and Lucerne, were of music by Beethoven and Bruckner, two composers with whom he had become closely identified over the course of his long career. Born in Amsterdam on 4 March 1929, as a young aspiring musician he had grown up watching the great Willem Mengelberg at the helm of the Concertgebouw Orchestra, and after studying conducting under Ferdinand Leitner, from the mid-1950s he formed an association with the Netherlands Radio Union Orchestra (later the Netherlands Radio Philharmonic), becoming its chief conductor in 1957. Following the death of Eduard van Beinum in April 1959, Haitink became first conductor of the Concertgebouw Orchestra (with whom he had made his debut in 1956, filling in for an indisposed Carlo Maria Giulini). In 1961 he was named the Concertgebouws principal conductor, at first in tandem with the more experienced Eugen Jochum, and from 1963 as sole principal conductor, a post he remained in until 1988.

Haitinks quarter century with the Concertgebouw is regarded now as a golden age, during which the orchestra consolidated its position as one of the worlds great musical ensembles. Haitinks musical tastes were relatively conservative by modern standards, but his cycles of Mahler, Bruckner and Shostakovich (the latter jointly with the Concertgebouw and the London Philharmonic, whose principal conductor he was from 1967 to 1979) were still pioneering. For a generation of record buyers, the choice for a complete Mahler cycle was between Haitink and Kubelík, and for Bruckner between Haitink and Jochum. Given his lack of experience in the opera house, Haitink was a surprising choice as music director at Glyndebourne, where he was appointed in 1978, but it was a challenge he clearly relished, in repertoire ranging from Haydn, Mozart and Beethoven, through Verdi and Richard Strauss, to Stravinsky, Debussy, Prokofiev and Britten.

By the time Haitink was appointed as music director of the Royal Opera House in London, he had a fair amount of operatic experience under his belt. It was his calm authority and steady nerve, both on and off the programme, that helped him steer the company through an unusually testing and turbulent period, culminating in the closure of the house between 1997 and 1999 for rebuilding. Some found his conducting too detached for the dramatic cut-and-thrust of opera, but his clear-headed, well-structured interpretations created space for the singers to breathe and feel supported  a prerequisite for sound operatic performances  and his conducting at its best, in Mozart, Verdi (a notable Don Carlo) and Wagner (the Ring and Parsifal), was greatly admired.

Having steered the ROH through such a momentous time, in 2002 Haitink became chief conductor of the Staatskapelle Dresden, though he resigned after only two years in post over differences with the intendant of the Dresden Staatsoper. He was principal conductor of the Chicago Symphony Orchestra from 2006 to 2010, but otherwise his later career was devoted to guest appearances, forging particularly close ties with the Berlin and Vienna Philharmonics and the Bavarian Radio Symphony Orchestra as well as the London Symphony Orchestra, with many of his performances including complete Brahms and Beethoven cycles appearing on the LSOs own label to great acclaim. Haitink had already established a formidable discography on Philips (now Decca) with the Concertgebouw Orchestra, but his later live performances as captured on disc demonstrate extra depth and insight, often with more vivid results. Textural clarity and a sense of line were always Haitink trademarks, whether in Bruckner or Stravinsky, while his long association with the British musical scene led him to explore the music not just of Elgar and Britten but (more rarely for a foreign-born musician) Vaughan Williams: his complete cycle of the symphonies and other works with the LPO was a highlight of his EMI discography (now Warner), as were recordings emanating from Glyndebourne.

Haitinks name inevitably evokes the symphonies of Mahler, Bruckner and Shostakovich, as well as the operas of Mozart, yet some of his greatest music-making was devoted to the works of Claude Debussy. His recording of Jeux and the Trois Nocturnes with the Concertgebouw has long been one of the glories of the catalogue (not to mention a La Mer which seriously rivals the supposed supremacy of Karajan classic Berlin account), while his glowing live French performance of Pelléas et Mélisande (2001, currently unavailable) with a cast headed by Anne Sofie von Otter, Wolfgang Holzmair and Laurent Naouri tops the listings for many. In Debussy, it seems, Haitinks level-headed, self-effacing style and keen ear worked wonders for the transparency and pacing of the music just as it did in his more celebrated Mahler and Bruckner recordings.

Listeners will have their own treasured Haitink recordings and live performances. For the Spin Doctor, there are three particularly special memories. Firstly, a 1981 performance at the Albert Hall in Nottingham, at the end of the UK leg of a Concertgebouw tour, starting with Mozarts Symphony no.39 (a composer for whom Haitink always had a soft spot and sure touch), then Debussys Six Épigraphes antiques in Rudolf Eschers winning orchestration, and finishing with a powerful, gaunt reading of Shostakovichs Fifth Symphony. Secondly, a 1983 Proms performance (again with the Concertgebouw) of Mozarts Haffner Symphony followed by a perfectly paced and intensely moving account of Bruckners Ninth Symphony (roughly contemporaneous with the same performers digital remake, complete with  naughty-but-nice extra timpani figuration at the end of the first movement). And thirdly, the overwhelming, spaciously conceived yet grippingly powerful Royal Opera production of Janáčeks Jenůfa (2001) with Karita Mattila and Anja Silja formidable in the lead roles, expertly guided through the score by Haitink.

With his refined, concise baton technique and restrained podium manner, Haitink in some ways resembled such older conductors as Fritz Reiner and Karl Böhm, yet in his quietly authoritative yet distinctly un-authoritarian approach to music-making he was in many respects one of the first of the modern maestri. It is to be hoped that many of his currently unavailable recordings will be restored to the catalogues soon (it beggars belief that neither the Mahler nor the Bruckner sets are presently in the catalogue, nor several of his more important opera recordings).

A similar hope must be held out for the recordings of the great Slovak soprano Edita Gruberová, who died suddenly on 18 October in Zurich at the age of 74, having  like Haitink, but at a rather younger age  effectively retired from public performances in 2019. Starting off as a fresh-voiced coloratura soprano in Mozart and Richard Strauss, from the 1970s she was the go-to performer for Mozarts Queen of the Night in Die Zauberflöte (with Haitink among others), Konstanze in Die Entführung aus dem Serail, Adele in Johann Strausss Die Fledermaus and Zerbinetta in Richard Strausss Ariadne auf Naxos. Soon dubbed the Slovak Nightingale, she excelled above all in the bel canto repertoire (Spin Doctor was lucky enough to see her as Giulietta in Bellinis I Capuleti e i Montecchi opposite Agnes Baltsas Romeo in Vienna in 1985!), with Donizettis Lucia among her signature roles. Gradually she added the other leading bel canto soprano roles to her repertoire, from Linda di Chamounix to Beatrice di Tenda, Lucrezia Borgia and Norma. By the time of her final performances her voice had aged little and, although she had dropped the Queen of the Night from her repertoire some years ago, her reputation remained consistently high among opera lovers.

Gruberová took Austrian citizenship in 1974, but appeared relatively rarely in the UK, concentrating her activities on Vienna, Salzburg, Zurich and, especially in later years, Munich at the Bavarian State Opera. All the more treasured, then, for anglophone audiences, are her recordings, from Mozart and Rossini via Bellini and Donizetti to Verdi and Richard Strauss, as well as in the Lied repertoire. Like Haitink, she represented what seems like a fast-vanishing age, and has even been dubbed the last prima donna assoluta. Certainly, her untimely death has robbed post-war opera of one of its brightest and most distinctive figures.