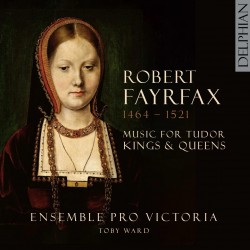 With all but small-scale musical activities largely suspended until recently over the last year-and-a-half, new recordings have witnessed bumper crops of solo recitals and chamber music, but another apparent beneficiary has been early music. Anything from the early Baroque and still earlier eras is often unexplored territory for many listeners, but with the rise in performance standards of the past few decades and the huge expansion of repertoire (not to mention the emergence of many independent labels willing to take commercial risks), there has never been a better time to explore the rich musical seams of the seemingly distant past. So, quite apart from the Bach, Handel and Vivaldi recordings (many of them outstanding) in the past twelve months, there have been some utterly absorbing discs of less familiar fare. Among our favourites from earlier this year have been Byrd 1588 from vocal ensemble Alamire and the viol consort Fretwork under the direction of David Skinner (Inventa INV1006) which features a valuable complete recording of William Byrds Psalms, Sonnets & Songs of 1588; and a disc from Gothic Voices of late-14th and early-15th-century music from the famed Old Hall Manuscript (Linn CKD644): including works by John Cooke, Leonel Power, Richard Pycard and John Dunstable, it focuses on the first Golden Age of English music, as well as the response it drew from such Burgundian masters as Dufay and Binchois, who were captivated by the so-called Contenance angloise (English manner).

More recently, and of similarly high artistic standard, a clutch of discs has focused on continental repertoires from central Europe. Stylus phantasticus (Reference Recordings FR742) explores the emergence of the fantastic style in early Baroque music, from its Italian roots to its uptake in the Habsburg lands by such relatively familiar names as Biber and Schmelzer (repertoire that Harnoncourt and colleagues did much to champion over half a century ago). Violinist Tekla Cunningham is the star virtuoso here, in partnership with Pacific MusicWorks under the experienced direction of Stephen Stubbs; but its also a treat to hear the distinctive strains of the Baroque harp, whether solo or coupled with the Baroque guitar, in music by Giovanni de Macque and Francesco Corbetta. With its gaze focused further south, Adriatic Voyage (Delphian DCD34260) brings together the voices of The Marian Consort (under Rory McCleery) with the instruments of The Illyria Conort (led by director Bojan Čičić), and we hear plenty from star cornettist Gawain Glenton in 17th-century music with a distinctly Venetian flavour, but which includes marvellous sacred works by such rarely-heard Adriatic Slavs as Vincent Jelich, Ioannes Lukacich and Giulio Schiavetto. And if that whets your appetite, you may also want to investigate The Myth of Venice, focussing on Glentons dazzling cornett playing alongside Silas Wollston on a variety of keyboards in 16th-century Venetian instrumental music by a host of famous and much less familiar composers (Delphian DCD34261).

Venice of a later era is the focus of a splendid new disc from violinist Adrian Chandler and his baroque ensemble La Serenissima. Their previous recording, including several of Vivaldi, have been widely praised (two of them winning Gramophone Awards), and this latest one, dedicated to music by Vivaldis contemporary Giuseppe Antonio Brescianello (c.1690-1758), is every bit as fine. The concertos and sinfonias that comprise his Opus 1 have a distinctly Vivaldian cut, but with an assured individuality and engaging solo violin writing (and playing!), while the Overture-Suite that closes the disc combines a venetian appeal with the world of the French Baroque overture-suite (and indeed Telemanns contribution to the genre). Entitled Behind Closed Doors (Signum SIGCD693), its eminently enjoyable for those who (like Chandler and his colleagues) want to explore away from the well-beaten track (or canal, if you will).

Back to earlier English repertoire, and a new recording from the Ensemble Pro Victoria under Toby Ward is devoted to church and courtly works by Robert Fayrfax (1464-1521) from the early Tudor period (Delphian DCD34265). Much of Fyarfaxs music is familiar from the Eton Choirbook, but the big attraction is a reconstructed Credo from a mass written for the private wedding of Henry VIII Catherine of Aragon. The performances themselves are gloriously full-throated and characterful, a hugely welcome antidote for those who find many performances of the Tudor repertoire a tad too precious. As a single-disc tribute to Fayrfax on the 500th anniversary of his death, this ticks all the right boxes, and should be required listening for all who love English music of the Tudor era.

Another very tempting looking disc is An Elizabethan Christmas, featuring mezzo-soprano Helen Charlston and the viols of Fretwork, in music by Byrd, Anthony Holborne, Orlando Gibbons, Martin Peerson and Thomas Weelkes (Signum SIGCD680). A mixture of the reflective and the exuberant, on an intimate scale, this should be a firm favourite with anyone looking for a musically special festive treat. Meanwhile, recordings marking the 500th anniversary of Josquins death are continuing to appear, making up for infrequency (compared, for instance, with last years Beethoven bash) with excellent quality. Josquins Legacy, exquisitely sung by The Gesualdo Six under Owain Park, includes some of his greatest music (the meltingly transcendent Nymphes des bois he composed as a memorial to Johannes Ockeghem) alongside that of such contemporaries as Brumel, Isaac, Mouton, de la Rue and Willaert, as well as Ockeghems polyphonic tour de force Intemerata Dei mater (Hyperion CDA68379).

Two more striking recent releases deserve mention: Jacobus Regnart (c.1540-1599) is the latest composer to be treated to performance by the luxuriantly stylish Renaissance vocal ensemble Cinquecento in their continuing exploration of musicians with links to the Habsburg court of the period (Hyperion CDA68369). Their accounts of two masses by this figure who Lassus, no less, rated highly is a vital addition to the catalogue. So too is a four-disc collection of the complete works of the complete works (sacred and secular) of Antonio Zacara da Teramo, an enigmatic figure from the late Middle Ages whose contribution to music of the late 14th and early 15th centuries has only recently begun to come into focus (ALPHA640). The exceptionally vivid performances of La Fonte Musica under Michele Pasotti combine pioneering zeal and imagination with expertly focussed scholarship, and the sheer variety of Zacaras music, often with a surprisingly modern flavour evidently connected with the ars subtilior of the period, is abundantly clear throughout. For dedicated early music lovers, as well as the musically adventurous and inquisitive, its an absolute must.