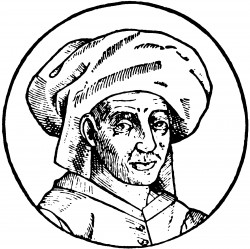 27 August 2021 marks the 500th anniversary of the death of Josquin Desprez, perhaps the central figure of what is now known as the Franco-Flemish musical Renaissance. Like many artistic figures of the Middle Ages and Renaissance, details of his early life are sketchy: he was born around 145055, probably near Saint Quentin in northern France, as Josse (or Josquin) Leboitte, but subsequently acquired the suffix des Prez already used by his father and uncle  indicating that his paternal grandfathers family may have originated in the village of Prez some 10 miles south of the Eau Noire river in the Ardennes. These likely origins place him firmly among the Franco-Flemish composers who  for a number of social and artistic reasons  dominated early and high Renaissance music.

Like his origins, other details of Josquins life are similarly sketchy, but career took him, via Aix-en-Provence, Condé-sur-lEscaut and perhaps Paris, to Milan, the papal chapel in Rome, Mantua, the French court, Ferrara, and finally back again to his home region and Condé-sur-lEscaut. By the end of his life he had achieved a level of renown and admiration hitherto unprecedented for a composer  the closest precedent was Johannes Ockeghem (1410/251497), in whose memory Josquin composed the hauntingly beautiful lament Nymphes des bois/Requiem aeternam, hinting at a possible teacher-pupil relationship. In the years following his death, editions and copies of his works were in high demand, to the extent that many works by other composers were re-labelled as being by him to win commercial advantage. The scale of these misattributions has only become clear in the past few decades, yet what survives is still a sizeable output encompassing all the major musical genres of the day: nearly 20 complete mass settings, two Magnificats, some 50 motets, and over 60 mainly French-texted secular works including chansons and canons.

As well as leaving a substantial body of work, Josquin is one of the first composers for whom reasonably plausible suggestions of an early, middle and late style have been proposed: a very Romantic projection, perhaps, but also indicative of the ways in which he comes across as a very modern composer in the 19th-century sense. Certain detectable character traits such as an unwillingness to suffer fools gladly put one in mind of Bach and later geniuses, as does the restrained simplicity of his late style in such works as the great Missa Pange lingua and the six-voice chanson Nymphes, nappés. Such expressive restraint only comes about through complete mastery of ones material: as Martin Luther famously noted of Josquin, he is the master of the notes. They must do as he wills; as for the other composers, they have to do as the notes will.

Josquins technical mastery is on display most vividly in the middle-period Missa Hercules dux Ferrariae, its foundational musical phrase derived from the name of Josquins patron, Ercole I dEste, Duke of Ferrara, and the two LHomme armé masses, which combine formidable compositional virtuosity with absolute formal clarity. This concern with coherence and lucidity is present in Josquins earlier works, too. The well-known motet Ave Maria  virgo serena is structured in a way that, in retrospect, seems strikingly modern, with each line of the text receiving a different musical treatment, endowing it with character while making its formal structure vividly apparent. In combination with supreme polyphonic gifts and a keen sense of harmonic shaping, this was a radical development from the late medieval traditions inherited by Dufay, Binchois, and Ockeghem, and it marks Josquin as a key figure in the emergence of a new humanistic sensibility which would transform attitudes to musical composition and performance for generations after his death.

Josquin was not, however, merely a refined aesthete stuck away in a metaphorical ivory tower. He may have moved in powerful, educated circles, and indeed eventually rose to the post of provost at the collegiate church of Condé-sur-lEscaut; yet he knew how to turn his hand to more relaxed fare as well: the enchanting Petite camusette, for example, with two of its six voices in canon, or those perennial favourites Scaramella and El grillo, examples of the popular Italian frottola. Combined with his prodigious compositional capabilities  of a sort that puts one time and again in mind of Bach over two centuries later (and Beethoven, three)  it is undoubtedly the broad range of his output that ensured its enduring popularity and enviable reputation in the decades and centuries after his death. The compositional conventions of the time meant that he worked exclusively in vocal/choral genres, yet later generations were keen to transfer it to instrumental use, primarily in lute tablature, where it gained a new and significant afterlife in the emerging humanist era.

That Josquins music continues to fascinate and enthral is obvious in the wide range of recordings it has enjoyed since the post-war early music revival. His works have been central to the repertoire of such groups as David Munrows Early Music Consort, Thomas Binkleys Munich-based Studio der frühen Musik, the Hilliard Ensemble, and (of course) Peter Phillipss Tallis Scholars, whose long-term project to record all of Josquins mass settings (including a few of the misattributions) reached its glorious conclusion just in time for this years quincentennial. Although a similarly systematic survey of the motets and the secular works is still lacking, the range of recordings on offer is a tribute to Josquins continued appeal.

If western classical music is (as some have maintained) the notated music of the last 1000 years, then Josquin stands at its chronological centre-point; he can be seen as a new sort of composer, looking toward the late Renaissance and early Baroque in his increasing sensitivity to the importance of the text, and indeed far beyond in his approach to building musical structures. Yet he can also be seen as the summation of the late medieval and early Renaissance eras, rooted in the rituals of the church but also fully in touch with the worldly and the popular. His importance, centrality and individuality, as well as his musics sheer capacity to engage and delight, will come as a surprise to those who havent (yet) encountered him, but now is the ideal time to take the leap. Josquins is a legacy worth celebrating in the boldest of colours.

Josquin and The Franco-Flemish School (various artists) 9029673084
- An imposing 34-CD set putting Josquin in context, with a generous selection of works not just by the great man himself, but also Binchois, Dufay, Lassus and Ockeghem among many others, with an outstandingly varied line-up of performers
Richafort - Requiem (Cinquecento) CDA67959
- A gorgeous collection of works composed in tribute to Josquin, including Gombert's magnificent setting of Musae Jovis, plus Josquin's own Miserere, Nymphes, nappés and Nymphes des bois