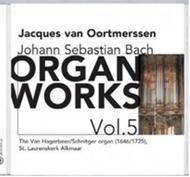 This repackaged CD of volume 5 of the outstanding series of the complete organ music of J.S.Bach from the great Dutch soloist Jacques van Oortmerssen was originally released in 1998. The music is performed on the Van Hagerbeer/Schnitger organ (1646/1725) at St. Laurenskerk, Alkmaar, an instrument reckoned to be one of the most beautiful in the world. The program selected here by the performer from the works of J.S.Bach has been specially chosen to match the sound of this particular organ.
Jacques van Oortmerssen studied organ and piano at the conservatory of Music, Rotterdam under André Verwoerd and Elly Salomé respectively. He continued his organ studies with Marie-Claire Alain in Paris and was awarded the Prix dExcellence in 1976. Since 1979 Jacques van Oortmerssen has taught organ at the Sweelinck Conservatory, Amsterdam. In 1982 he succeeded Gustav Leonhardt as Organiste-Titulaire of the Waalse Kerk in Amsterdam.
In choosing registrations for his Bach recordings, Jacques van Oortmerssen is following exactly Bachs (infrequent) indications for the use of one or more manual(s) and forte/piano dynamics. Moreover, he is basing his interpretations on that which is known about registrational practices in Bachs time and region; in this respect the surviving prescriptions of Georg Friedrich Kauffmann (1733-6) and Jacob Adlung (1758) are particularly useful. For the plena of the large free works, he is following conventions that are rooted in older traditions.