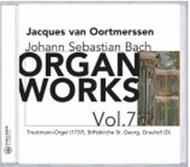 Jacques van Oortmerssen began his musical studies at the Rotterdam Conservatory, and between 1974 and 1976 was taught by the legendary Marie-Claire Alain in Paris. Since 1979 he has been Professor of Organ at the Sweelinck Conservatory in Amsterdam, and in 1982 he succeeded Gustav Leonhardt as Organiste Titulaire of the Waalse Kerk in Amsterdam. For the academic year 1993/94 he became Betts Fellow in Organ Studies at Oxford University. As a recitalist he has appeared in many international festivals including the BBC proms, the City of London Festival and the Prague Spring Festival. He is also active as a conductor and composer. Alongside his numerous releases on the Challenge Classics label, which include an ongoing cycle of the complete organ music of J.S. Bach, he has also made several recordings for the eminent Swedish label BIS.

Bach received his first appointment in 1703 at St Bonifacius in Arnstadt, and he became organist  (which included duties as a church musician) of St Blasius, Mühlhausen in 1707. From 1708 to 1717 Bach was employed as the court organist at Weimar, where he wrote the majority of his works for organ.