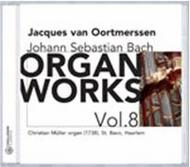 Although Bach was not occupied exclusively as an organist, his name and his works are clearly associated with the organ. He was acquainted with the instrument from his earliest years. After the death of his parents, ca.1795, he lived with his elder brother, Johann Christoph, the organist of Ohrdruf, and his family, and from 1700-2 he was a pupil at the Michaelis School in Lüneburg, where he probably came into contact with Georg Böhm (organist of St Johannis) and with the organbuilder Johann Balthasar Held (a pupil of the famous Arp Schnitger). From Lüneburg he journied to Hamburg where he heard Johann Adam Reincken (organist of St Catherinen) play. At the end of 1705 Bach travelled on foot to Lübeck to hear Dietrich Buxtehude, the renowned organist, play, and he remained there for three months.

From 1708 to 1717 Bach was employed as the court organist at Weimar, where he wrote the majority of his works for organ. Subsequently he served as Kapellmeister to the court at Cöthen (1717-23). In his capacity as Kapellmeister he was expected to write church cantatas for specific occasions. Although it is uncertain whether Bach had to fulfil duties as an organist, various organ works date from this period.

Jacques van Oortmerssen began his musical studies at the Rotterdam Conservatory, and between 1974 and 1976 was taught by the legendary Marie-Claire Alain in Paris. Since 1979 he has been Professor of Organ at the Sweelinck Conservatory in Amsterdam, and in 1982 he succeeded Gustav Leonhardt as Organiste Titulaire of the Waalse Kerk in Amsterdam. Alongside his numerous releases on the Challenge Classics label, he has also made several recordings for the eminent Swedish label BIS.