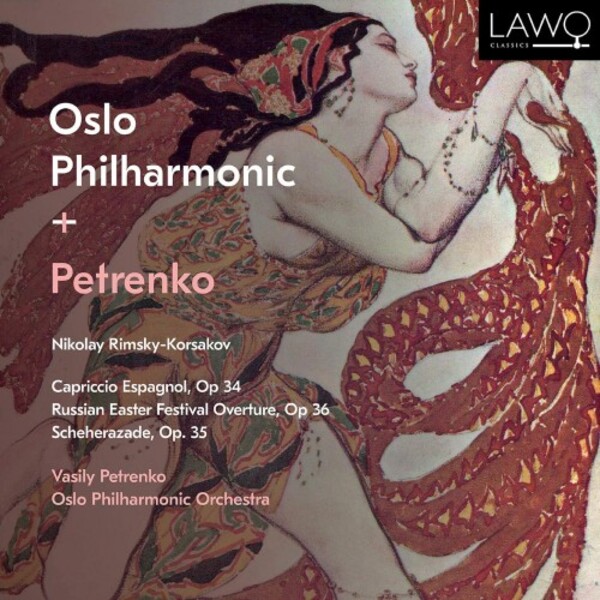 It was Nikolai Rimsky-Korsakovs older brother, Voin, who first put ideas of travel, ships and the sea into the would-be composer's head. The young Nikolai had never set foot aboard a boat but Voins evocative letters home from the Far East, where he was stationed in the Imperial Russian Navy, proved more than sufficient. In 1856, he enrolled as a naval cadet and completed six years of training. Barely a year into his studies at the naval academy, the young Nikolai saw his first opera. Soon he heard symphonies by Beethoven and Mendelssohn and encountered a piece by his senior Mikhail Glinka, Jota Aragonesa. Even before he embarked on a three-year voyage around the world aboard a clipper, Rimsky knew he wanted to be a composer, not a seaman. Afterwards, having sailed into some of the great ports of the world, he returned home happy never to leave Russia again the only journeys Rimsky wanted to make were musical.
The Oslo Philharmonic under the baton of Vasily Petrenko perform Rimsky-Korsakovs Capriccio espagnol, op.34, coupled with the Russian Easter Festival Overture, op.36, and the symphonic suite Scheherazade, op.35, on this brand new recording from Lawo Classics.
Vasily Petrenko is one of the most significant and galvanizing musicians alive. He is one of the most acclaimed classical recording artists alive and has won numerous accolades for his recordings of Russian repertoire, including two Gramophone awards. With the Oslo Philharmonic, he has recorded Shostakovich and Szymanowski concertos, Romeo and Juliet by Prokofiev, as well as two major cycles of orchestral works by Alexander Scriabin and Richard Strauss respectively. This new recording of Rimsky-Korsakov with the Oslo Philharmonic continues their journey together and is sure to generate critical acclaim.
Previous Strauss recordings were selected as Editors Choice by Gramophone magazine and were universally critically acclaimed.
There's no lack of excitement or, where needed, bombast, and the Osloers' sound at full throttle is thrilling, their playing superb.  Gramophone
As Petrenko's tenure in Oslo begins to wind down, he revels in the standards of orchestral virtuosity he has attained with this excellent band in two Strauss tone poems that challenge all instrumental departments...the Osloers shine brilliantly.  The Sunday Times

As Vasily Petrenko bids farewell to the Oslo Philharmonic after seven years at the helm, its difficult to imagine a more apt parting gift than the present disc, which collects together Rimsky-Kosrakovs three great Russian orchestral showpieces of 1887-88. Positioned between Rimskys apprenticeship years as an emerging orchestral composer of rare genius and his brilliant late series of operas, these are works that combine supreme instrumental flair, exquisite musical and structural judgement, and a delight in unfolding narrative that have been benchmarks for generations of great orchestras. And here the Oslo orchestras huge individual and collective strengths are matched by Petrenkos excellent feel for musical and textual balance, in performances that showcase a depth of tone and understanding that has characterised this partnership in a series of splendid recordings.

Proceedings are launched with a cracking performance of the Capriccio espagnol, a work that exudes the flavour of a country which the composer never visited but for which he clearly had great sympathy. The opening Alborada is splendidly exuberant, with Elise Båtness dependably agile solo violin already to the fore, but also an exceptionally nimble clarinet characteristic of the Oslo woodwind as a whole. The following nocturnally-tinged variations are marvellously languorous, with rich, burnished horns leading the way, a splendidly evocative cor anglais, and gloriously sensuous flute melismas in the closing bars. Theres extra bounce to the violin solos in the varied repeat of the Alborada, while the Scena e canto gitano fourth movement opens with brass fanfares of real dramatic flair, a violin cadenza that is every bit as arresting, and wonderfully limpid solos from from flute, clarinet and harp; the Canto gitano itself has plenty of gypsy flair, whipping up a real sense of anticipation leading into the closing Fandango. In this last movement the Oslo violins and percussion in particular throw themselves into the exultant mood, and Petrenko keeps just enough in reserve for the final Presto of the Coda to sweep you off your feet.

Its quite a change of mood from the giddy excesses of the Capriccio espagnol to the sombre, liturgically-flavoured opening of the Russian Easter Festival Overture, but the Vaughan Williams-like violin solo and the rays of spring sunshine from the woodwind lift the spirits before the brass intone their version of chant theme. This is a performance in which the musics pagan and Christian elements are held in perfect balance, the brass kept in check but adding well-rounded weight where necessary. The sounds of Russian church bells, folk-style chanting and monastic bass tones are palpably authentic without being wayward (with an especially redolent solo trombone recitative at 749). As suggestive as it is, this is also a tightly organised concert overture in a tradition stretching back via Schumann and Mendelssohn to Beethoven, and Petrenkos performance combines brilliance and jubilation with robust control and groundedness. Its a very centred performance, and the dazzling closing pages are all the more imposing for it.

That sense of grand scale segues neatly into the stern opening brass tones of Scheherazade, Rimskys virtuosic take on the 1001 Nights, before the solo violin of the eponymous storyteller tempts the listener into her realms of magical fancy. Once again theres plenty of weight when required, especially from the brass section as Sinbads ship takes to the seas, but also great delicacy in the quieter passages, and marvellously shaded support for Båtness appropriately beguiling solo passages.

The gently ascetic, musing quality at the outset of the Kalendar Princes wanderings in the variation-style second movement throws his unspecified but nevertheless vivid adventures into bold relief. Brass exchanges are particularly thrilling, the clarinet and bassoon solos teasing the listener to just the right degree. The movement as a whole has a sense of scale that keenly anticipates the finale. But before that, the third movement, The Young Prince and the Young Princess, is as sensuous and soft-hued as one could wish, a reminder of the erotic flavour of many of the tales in the 1001 Nights. For suppleness of tone, the Oslo strings have few equals, while the woodwind and horns are once again on winning form.

The strengths of the disc as a whole culminate thrillingly in Scheherazades final movement: The Festival at Baghdad, the Sea and the Shipwreck. Theres all the bustle of a busy market, of rushing through crowded streets, the excitement expertly built (by Rimsky and by Petrenko) into the tempestuous final sea voyage, and then the crashing into the cliffs beneath the Bronze Horseman. Theres plenty of excitement and character here, but also expert pacing, balance and a satisfying sense of organic wholeness. For those who like their musical thrills tempered by a feeling of sonic and formal equilibrium, this splendidly recorded disc will certainly hit the spot: its altogether thoroughly recommendable, even against such plentiful and strong competition, an enduring tribute to a great musical partnership.