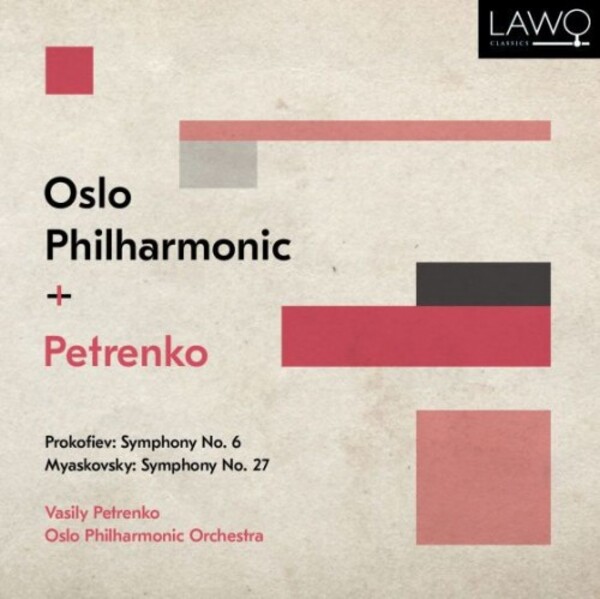 The table is hereby set for the second and final recording of Vasily Petrenko and Oslo Philharmonics releases with symphonic works of Sergei Prokofiev and Nikolai Myaskovsky.

Both Prokofiev and Myaskovsky, who were close friends, suffered under the oppressive Soviet regime, and, in the course of their careers, had to compose with threats of artistic censorship hanging over them.

Prokofiev composed his Symphony no.6 in E flat minor, op.111, between 1945 and February 1947, though some sketches date from 1944 before he completed the fifth symphony.

It is written for large orchestra and is a profound and personal work with an unmistakable tragic element. He said himself that this symphony was inspired in part by the war years: Now we are rejoicing in our great victory, but each of us has wounds that cannot be healed.

Myaskovsky completed the last of his symphonies in C minor, op.85, in November 1949. His 27 works in this genre are so strikingly varied in character that is is virtually impossible to define a typical Myaskovsky symphony.

No.27 is often referred to as one of his most popular, even though his music was hardly performed outside of Russia. Prokofiev described the music of his good friend in this way: Myaskovsky was something of a philosopher his music is intelligent, passionate, sombre and self-absorbed.

Vasily Petrenko is one of the most acclaimed classical recording artists alive and has won numerous accolades for his recordings of Russian repertoire, including two Gramophone awards. With the Oslo Philharmonic he has recorded Shostakovich and Szymanowski concertos, Romeo and Juliet by Prokofiev, and major cycles of orchestral works by Alexander Scriabin and Richard Strauss.

The Oslo Philharmonic Orchestra first saw the light of day in 1919. Vasily Petrenko led the orchestra through its 100th anniversary season, including a European tour. In Oslos burgeoning cultural scene, the Philhamonic under Petrenkos leadership has been a vital and forward-looking centenarian.

The second of a two-disc series coupling symphonies by Prokofiev and Myaskovksy, this recording comes as Vasily Petrenko leaves the Oslo Philharmonic after a period of seven years as its music director. Its a great shame that the cycle couldnt be extended further, as the pairing of these two composers is such an interesting one: their styles are complementary, Prokofiev the more daring, both in size of orchestra and in distinctive scoring (with characteristic, imaginative doublings and often biting sarcasm), Myaskovsky more classical, and superbly scored in Russian textbook style. The Oslo Philharmonic under Petrenko is in top-notch form, recalling the days when Mariss Jansons was conductor  his new position as principal conductor of Russias Evgeny Svetlanov State Academic Symphony Orchestra will be one to watch out for.

Both symphonies on this CD date from the immediate post-war years: Prokofiev started work on his Sixth Symphony before he had finished composing the mighty Fifth, and it was premiered in October 1947 with great success by the Leningrad Philharmonic under Yvgeny Mravinsky. Whatever the story behind the notes, Prokofiev was guardedly succinct in his explanation of the music, and critics praised it while noting its expressive ambivalence. Even Myaskovsky, a close friend of Prokofiev, admitted that it took some getting into, and observed that it was somewhat sombre and orchestrated austerely. The Sixth was one of the works that came in for harsh criticism in the 1948 Zhdanov Decree, laid out by Stalins culture boss Andrei Zhdanov, and the musics often pained ruminations on loss in the aftermath of World War II must have grated against the Soviet triumphalism of the time. (The official line was against formalism, which in practice covered a multitude of sins including anything that didnt toe the Party line.)

In this performance, however, what emerges is the works richness and depth, with even the often bleak yet dogged tread of the opening movement given extra dimension through the care Petrenko takes over dynamics and pacing. By giving the music a shade more space than usual, he highlights the brilliance of Prokofievs orchestration, with only the often important orchestral piano part a little on the shy side. Otherwise every section of the orchestra is on its mettle: sturdy brass with biting trumpets, bright woodwind and glowing strings. The key to this three-movement work is the central Largo, often a pitfall even for big-name conductors: Petrenko allows it to open out and bloom as few others have dared to, and the result is transformative. The glorious passage for four horns at figure 10 is especially memorable, as is the following magically scored episode for celesta and harp. In the Vivace finale the playing is dazzlingly brilliant, so that the heart-rending reminiscence of the first movements introspective oboe theme hits home all the more effectively. The following orchestral climax is overwhelmingly intense, throwing into stark relief the lively, upbeat final pages. What emerges is a performance that places the Sixth if anything on a higher pedestal than the far better known Fifth and Seventh symphonies, and an important addition to the works discography, captured in splendidly immediate sound.

As already hinted above, to turn then to Myaskovsky is to enter a different world, without the quirkiness of Prokofiev, but with a supremely assured command of the orchestral palette. Mayskovsky, too, fell foul of the Zhdanov Doctrine, and his Symphony no.27 in C minor of 1949 (his final work in the genre) had to wait until December 1950, four months after his death and following his posthumous rehabilitation, for its premiere. Like Prokofievs Sixth, this is a three-movement work with a central slow movement. The opening movement has an Adagio introduction that speeds up (à la Schuberts Great C major in the old days) to an Allegro animato that has a pastoral flavour to it, and a bracingly fast development section which, in this performance, flies along like a winged Mercury. The central Adagio starts with chorale-style brass, recalling Dvořáks New World Symphony, and also features a noble string theme marked molto elevato (very elevated) and some gorgeously deployed woodwind solos, played here with loving care.

The finale, marked Presto ma non troppo, has a scurrying main theme against which more lyrical ideas are set, and a brilliantly contrasted martial idea which recalls Balakirev and Liadov at their best, building to a triumphal C major conclusion. This music may not have the depth or pain of Prokofiev, but played with the same commitment by Petrenko and his Oslo forces it makes a marvellous impression, and this account should do much to raise Myaskovskys profile among those yet to hear his music. It sets the seal on a thoroughly engaging disc, and inevitably leaves one wishing there could be more