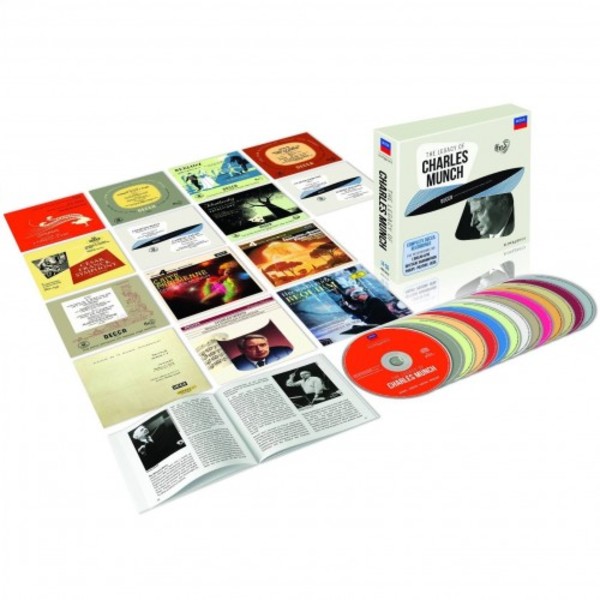 The Legacy of Charles Munch

Fantasie in A flat major, op.62

Fantasie in A flat major, op.62

The inspirational French maestro on disc: an unrivalled retrospective, covering three decades of incandescent music-making, including recordings new to CD and long unavailable, newly remastered and comprehensively documented.
In the memories of most record-buyers, Charles Munch was indelibly and almost exclusively associated with the RCA label, thanks to a string of spectacular albums made during his thirteen-year-long tenure as Music Director of the Boston Symphony Orchestra. From telecasts of that era too is fixed the image of the white-haired, square-jawed maestro urging on his Boston musicians to ever greater heights of intensity with gestures of both elemental passion and delicious legerdemain.
These qualities were also present, however, in the recordings made by Munch for several other labels throughout his career. They have now been brought together by Eloquence in a set that offers the most rounded portrait yet of the conductor throughout his career. His earliest recordings were made in Paris for Polydor and for LOiseau-Lyre in 1938, of concertante works by Ravel, Widor (the rarely heard Fantasie for piano and orchestra) and Haydn: these have been newly transferred from original masters by Mark Obert-Thorn.
From the beginning of his postwar contract with Decca come London-made recordings of French repertoire (Berlioz, Bizet, Debussy, Fauré, Franck, Ravel, Roussel, Saint-Saëns) and Austro-German symphonies (Beethoven 8, Mendelssohn 5, Schumann 4), conducting the Orchestra of the Société des Concerts du Conservatoire de Paris which he had led since 1939. In these performances, sustained throughout by a sweeping legato line, we may recall Munchs insistence that To be a conductor is not a métier but rather a sacred rite. This is no less true of a ragged but thrilling Pathétique Symphony from 1948, now recorded in Paris.
After the Boston years, Munch struck up a partnership with the New Philharmonia Orchestra (1965-67), which yielded albums of Bizet, Offenbach and Respighi in which the conjurors magic fire remained undimmed. He also returned with them to a suite from Roussels Bacchus et Ariane ballet which was always a Munch favourite in concert. His last studio account from Budapest in 1966 of the Symphonie fantastique is also here, having appeared on Fidelio, Hungaroton and Philips, but long unavailable. The set concludes with more Berlioz  Munchs sole recording for Deutsche Grammophon, of the Grande Messe des morts. This was made in Munich in 1967, the year before his death, and is a moving testament to the conductors career-long dedication to realizing the most original orchestral and acoustic possibilities explored by a composer who, like Munch himself, always went his own way.
A wonderful piece of playing, backed up by superb recording which captures every detail of the large score and yet maintains a true overall perspective and fidelity.  Gramophone, February 1950 (Berlioz - excerpts from Roméo et Juliette)
Munchs second recording of Berliozs setting of the Requiem Mass resonates to a vision recognising that the devil is in the quiet detail, and that (paradoxically) intimacy triumphs.  BBC Music magazine, January 2012
Even the often-staid Scène aux champs is fraught with nervous energy. Munch is on far more freewheeling, maniacal form than in his inspired-enough Boston Symphony studio recordings.  Classics Today, January 2006 (Symphonie fantastique)
The orchestral playing is vivid in the extreme  Munch plays both suites for all theyre worth and all the big moments are brilliantly contrived.  Gramophone, August 1976 (Respighi)
A special tribute, in reviewing this outstanding recording, should go to Charles Munch, not only for his beautiful orchestral accompaniment, but for the sense of direction and authority that he has so obviously impressed upon the whole performance.  Gramophone, September 1947 (Franck - Variations symphoniques)