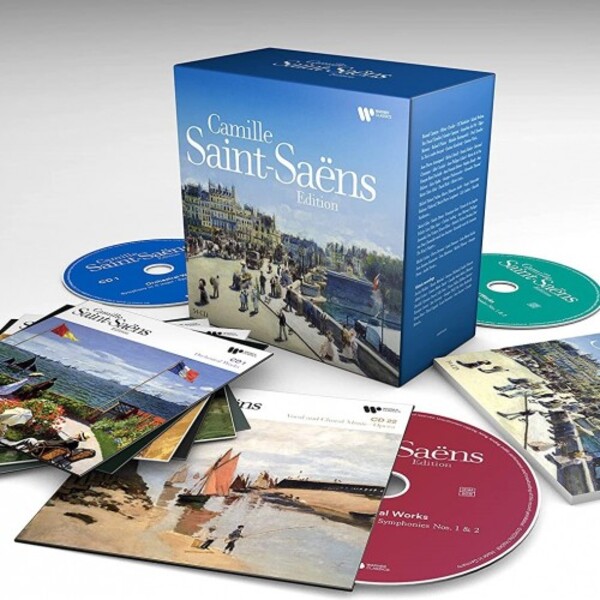 Over a remarkably long and illustrious career, Camille Saint-Saëns thrilled audiences around the world as a pianist and organist, shaped the course of musical life in France, and enriched a multitude of genres with some 600 works, all bearing witness to the mastery of his craft. Setting his best-known compositions in their dazzlingly diverse context, this edition invites exploration and discovery. It spans more than a century of recording history, encompassing a host of great instrumentalists, singers, conductors and orchestras, many of them from France. Setting the pace, in performances from as early as 1904, is the composer himself.

The release of this edition marks 100 years since the death of the prominent French composer Camille Saint-Saëns (1835-1921). Born in Paris in 1835 Saint-Saëns was a child prodigy as a composer  first work at 3  and pianist  first concert at 10.

At the start of the twentieth century, Saint-Saëns was by far the most-performed living composer, both in France and beyond its borders. His catalogue includes numerous masterpieces, some used as world-renowned jingles and background music: Aquarium from Carnaval des animaux is the curtain-raiser for every film shown at the Cannes Festival.

An exceptional performer, a pianist idolised by audiences and an incomparable organist, his reputation made him demanded everywhere: in addition to his native country he toured in the US, UK, Germany, Canary Islands, Egypt, Algeria He was involved in educating new audiences and developing the French music repertoire. He was the teacher of André Messager and Gabriel Fauré.

The Saint-Saëns Edition: An authoritative and representative survey of Saint-Saënss music in superlative interpretations by an array of outstanding musicians, including some of todays leading Erato / Warner Classics artists and Saint-Saëns himself as historical bonuses.

The huge range of works included in this 34-CD anthology will enable the listener to embark on a long-distance journey through the most varied of musical landscapes. The edition comprises all major works and less frequently heard smaller works.

Warner Classics has the largest catalogue of Saint-Saëns recordings and can offer an unrivalled edition of his works.
Historical bonuses
As much as 8 CDs are devoted to historical recordings, dating from 1904 to 1957, with Saint-Saëns appearing as pianist  he was one of the very first composers to be captured on disc in 1904  on piano rolls and acoustic recordings.

A luxury boxset in the same vein as the Debussy, Berlioz, Ravel and Stravinsky boxes
Wallets are illustrated with paintings by Monet, Degas and Caillebotte. The booklet includes a comprehensive essay by Saint-Saëns French specialist, Marie-Gabrielle Soret. A researcher, musicologist, chief conservator at Bibliothèque nationale de France, she just published a rich and documented biography of Saint-Saëns and curated the forthcoming exhibition at the Paris Opera.