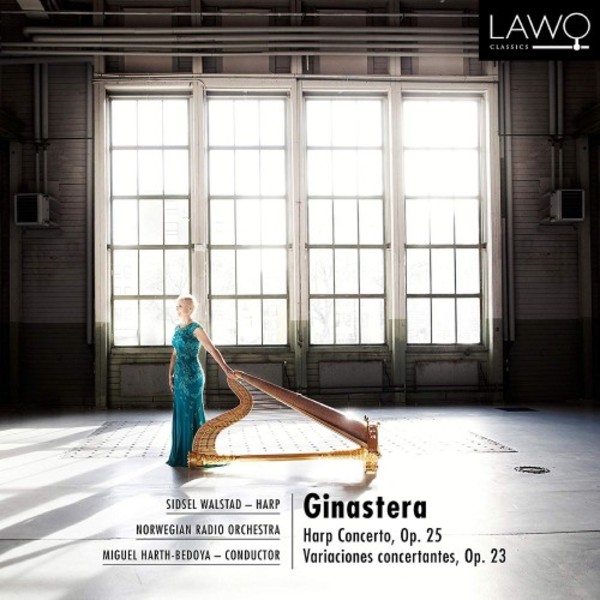 Alberto Ginastera (1916-1983) is a distinctive voice in twentieth-century classical music, and together with the master of the tango, Astor Piazzolla, he is the towering musical figure of Argentina.

Born in Buenos Aires of an Italian mother and a Catalonian father, Ginastera is a complex composer and personality, shaped by the traditional folk culture and history of his native country and by impulses from the world at large, during a time of radical upheavals in the realm of Western classical music.

The Harp Concerto was commissioned in 1956 by Edna Phillips. Composing commissioned works was, however, not always Ginasteras strong suit, so the work was not premiered until 1965, and then it was the Spanish harpist Nicanor Zabaleta. (Thus regarded, the harp concerto belongs both to the composers second and to his third composition period.) Sidsel Walstad has studied the original manuscripts and read the correspondence between Ginastera and Zabaleta and discovered that the composer added a few cubits to his knowledge of the harp in the process. Walstad bases her recording on a revised version from 1968 (also recorded by Zabaleta). When the concerto first appeared, it became a brilliant addition to the harp literature and twentieth-century instrumental concertos.

Ginastera significantly expands the range of expression as well as the expectations of what a harp can represent as a solo instrument. Here we encounter the harp as a rhythmic motor that accentuates the percussive quality of the music, but also brings out parts with intense and mystical beauty. Ginasteras work calls for a level of pedal technique not attempted until then and introduces nail effects on the strings. Despite the tremendous demands on the soloist, the concerto has become a standard work (still one of very few) for harp and orchestra.

Variaciones concertantes was completed more than ten years earlier and was premiered in Buenos Aires in 1953. In Ginasteras own words: These variations have a subjective Argentinian quality. Instead of using traditional folk material, I try to achieve an Argentinian mood by using my own thematic and rhythmic elements. The music is an irresistable combination of orchestral timbres and virtuosity communicating directly with the listener, especially as regards the entertainment aspect inherent in virtuosic orchestral sound and a demanding soloist performance. Solo parts are given to all the instruments in the orchestra, before the gauchos ride again in orchestral tutti in the closing rondo.