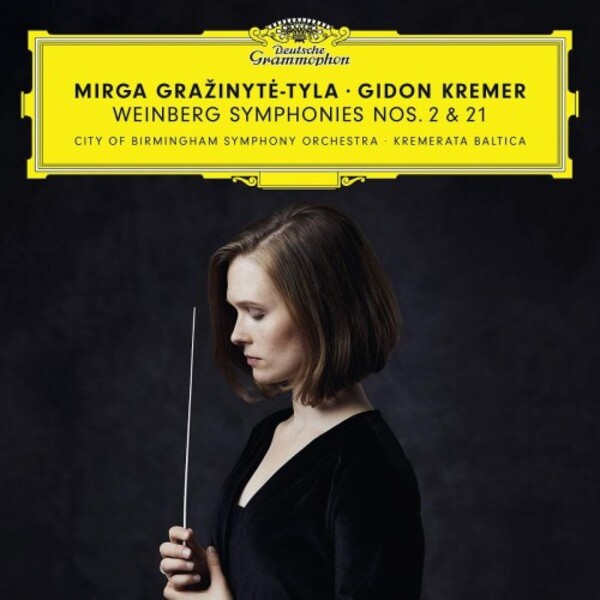 Mirga Grainytė-Tyla releases her debut album on Deutsche Grammophon  a collection of orchestral works by Polish composer Mieczysław Weinberg, whose centenary falls in 2019. She conducts the combined forces of the CBSO, Kremerata Baltica and violinist Gidon Kremer in Symphony no.21 Kaddish  a major work completed in 1991 and dedicated to the victims of the Warsaw Ghetto. She also directs Kremerata Baltica in the early Symphony no.2.

The Lithuanian artist Mirga Grainytė-Tyla, Music Director of the City of Birmingham Symphony Orchestra, is the first female conductor to join the Yellow Label since its foundation 120 years ago. News of her CBSO appointment hit the headlines worldwide in 2016 after she was unanimously chosen to take over a post formerly held by Sir Simon Rattle, Sakari Oramo and Andris Nelsons, just months after making her debut with the orchestra in July 2015. Their partnership has since flourished, with Grainytė-Tylas charismatic artistry and innovative programming attracting critical acclaim and widespread approval.

The UK premiere of Symphony No 21 in Symphony Hall last November was a watershed moment for Weinbergs reputation. ... The appearance of this performance on a major prestige label will surely prove one of the highlights of this, his centenary year. ... In takes a performance of fierce concentration and absolute dedication to ensure this musics hold on an audience. The Siberian SOs pioneer recording was a brave and noble venture but it is inevitably outclassed here. ... The appearance of these two symphonies on an illustrious label is another clear pointer to Weinbergs arrival. ... All in all, this has to be one of the most important symphonic releases of the year.  David Fanning (Recording of the Month)
Gramophone June 2019

Few discs released during the Weinberg centenary year are likely to make more waves for the composer than this. In violinist Gidon Kremer and conductor Mirga Grainytė-Tyla, it brings together two of Weinbergs staunchest advocates and they deliver stunning performances that can only help to bring his music to a much wider public.  Erik Levi (Recording of the Month)
BBC Music Magazine August 2019