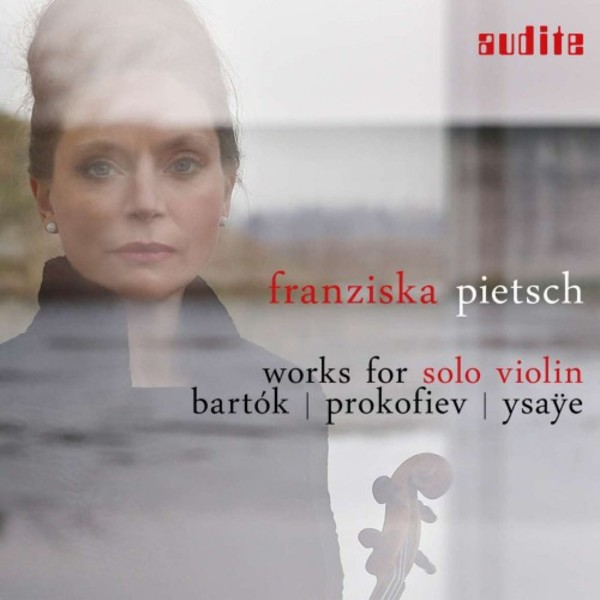 Franziska Pietsch's recent recording of the Prokofiev Violin Concertos with large-scale orchestra is followed seemingly by the opposite: works for solo violin. What appears, at first sight, to be a contrast is in fact a logical continuation of her extensive discography, even an enhancement: whilst in her previous releases, Pietsch demonstrated her expressive range and intensive approach both as a brilliant soloist and as an eloquent chamber musician, she now faces the greatest possible reduction, namely a solo recital. This limitation demands incredible presence, power and intensity, for which Franziska Pietsch is predestined.

For her solo recital, she has put together an individual choice of compositions which represent significant personal and artistic experiences. Prokofiev, to whose works she feels a particular affinity, is also featured here.

Bartók's solo Sonata, written for Yehudi Menuhin in 1944, and the six Sonatas op.27 by Ysaÿe are amongst the most prominent twentieth-century compositions for violin. Bach, the great paragon, is present in all these works. From Ysaÿe's cycle, Pietsch has chosen the particularly striking Sonatas Nos 2 and 3 which are dedicated respectively to the violinists Jacques Thibaud and George Enescu. As an "encore" she plays the solo Sonata op.115 by Sergei Prokofiev which had been intended for ambitions violin students. Transcending its original purpose, however, this compact work is a small stroke of genius.

in its mix of tenderness, raw emotion and high fidelity this one is rather special - Gramophone on Prokofiev Violin Concertos

... the cut and thrust of Pietschs playing makes a big impression ... The Melodia is beautifully phrased; the closing Presto a frenzied will‑o-the-wisp where the quarter-tones are an integrated part of the narrative.  Rob Cowan
Gramophone December 2018