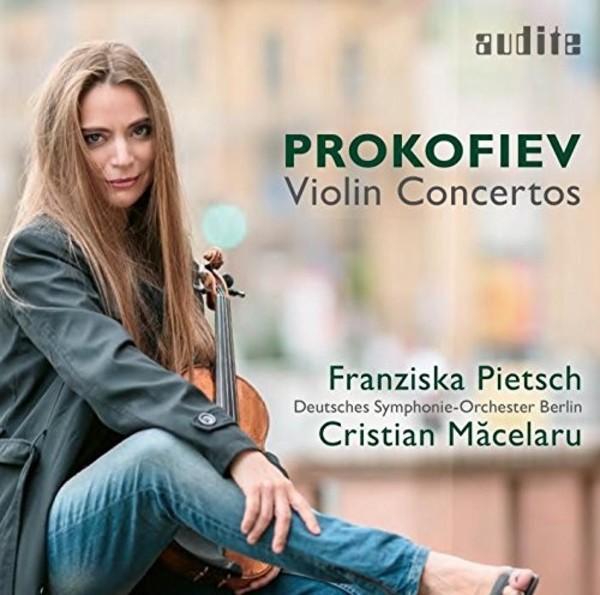 Sergei Prokofievs two Violin Concertos mark the beginning and the end of his exile: his early, challenging neoclassicism and the artistic route from his nomadic life in exile back to his home country. Ever since her career as a promising star of the GDR, Franziska Pietsch has felt at home in the music of this Russian composer, making her an ideal interpreter of Prokofievs virtuosic and multifaceted idiom.

Franziska Pietsch now presents an album featuring both Violin Concertos of the Russian composer. Alongside Cristian Măcelaru and the Deutsches Symphonie-Orchester Berlin she presents a thrilling new recording. The two violin concertos represent two phases in, and two sides of, Prokofievs life and work. The first was written during an era of early successes, stylistically and temporally close to his Symphonie classique, but not premiered until he was in exile. The second mirrors the itinerant existence of his life as a musician in exile, but also his longing to return to Russia.

Franziska Pietsch, the Anne-Sophie Mutter of East Germany (W. Dulisch). From promising star of the GDR with a burgeoning solo career to boycott, via a new beginning, chamber music and leading orchestras, back to being a soloist and enriched by a transformed understanding of her own role: with this recording of the Prokofiev Violin Concertos, Franziska Pietsch has come full circle. Thanks to her intensive engagement with chamber music and her experience as a concertmaster, Franziska Pietschs performances as a soloist are not only world-class, but also characterised by an exceptional sense of chamber-like intimacy.