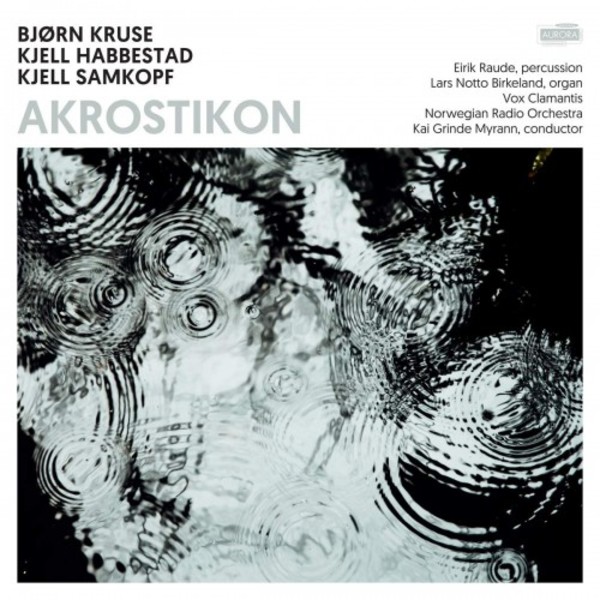 Concerto no.2 for vibraphone and strings

Concerto no.2 for vibraphone and strings

For several years Birkeland and Raude have collaborated on projects for percussion and organ resulting in a large number of concerts and commissioned works. Habbestad, Kruse and Samkopf have written music that brings out the potential in these exiting instrumental combinations. The recording took place in Fagerborg church on the impressive Goll organ inaugurated in 2007, now established as one of Oslos finest concert organs.

Akrostikon is when the first letter in each line vertically forms a word. Kruse says about his own work that he uses this as a picture on how one listens to music; one does not just follow a horizontal line, but also the spatial sounds. Numerology is an important part of Samkopfs work Concerto no.2 for Vibraphone and Strings where he uses Eirik Raudes name as the basis for the musical choices in the piece. Ave Maria, concerto for organ and strings, is based on a Gregorian sequence that tells the story about when the angel appeared for Mary telling her that she is going to be the mother of Gods child. In the last movement, Vox Clamantis sings a sequence from the angels message to Maria as described in the Gospel after Luke.

Eirik Raude has won many awards as a percussionist and has premiered over 50 works. He has a special interest in art forms such as video art, theatre and ballet as well as exploring new technology. Lars Notto Birkeland is a versatile performer as concert organist and conductor. He has done several collaborative projects with organ and different artistic expressions. As cantor in Fagerborg church he was important in the work with the new organ. Kai Grinde Myrann is educated as composer and conductor at the Norwegian Academy of Music. Since then he has conducted most of the professional orchestras in Norway and also abroad. The Norwegian Radio Orchestra is known and cherished throughout Norway and is often heard at large events. They have a unique interest for music from all genres, from the classical repertoire and contemporary to pop, rock and traditional music.

Iberg - Songs from the Planet of Life