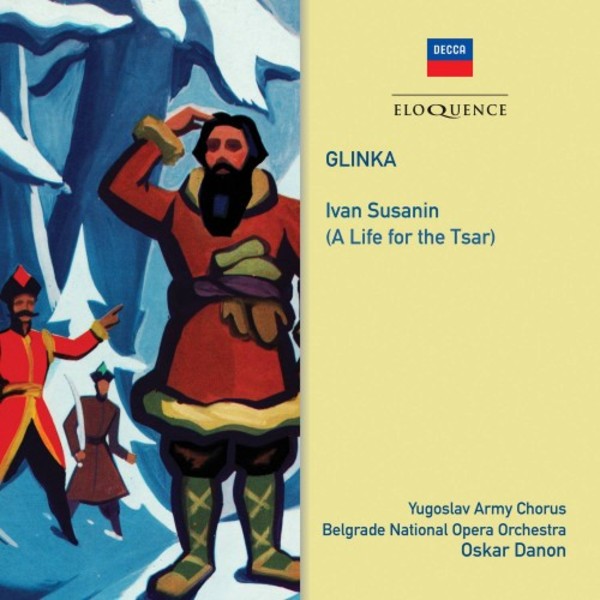 Glinka - Ivan Susanin (A Life for the Tsar)

A first release on CD for the first recording in stereo of the first Russian opera in its Soviet-era rewrite. With this and six companion issues, Eloquence makes available for the first time on CD the seven complete Russian operas recorded in 1955 by Decca with the company of the Belgrade Opera.

According to one Russian commentator, A Life for the Tsar marked the boundary between the past and the future of Russian music. After its premiere in 1836 in St. Petersburg, the importance of Glinkas patriotic heroic-tragic opera was quickly recognised not only by the literary men such as Pushkin and Gogol but across the Russian cultural establishment. It was the first Russian opera to be performed abroad (in Prague, in 1866) and it became the annual fixture to open the Bolshoi Operas season for many decades. When Stalin and his cultural apparatchiks were searching for a new expression of national pride in the Soviet state, after various commissioned works were found wanting, this emblematic music drama was a natural choice.

The crux of the original, however, lies in the willingness of the peasant Ivan Susanin to lay down his life for the tsar. Thus Sergei Gorodetsky was commissioned to revise the libretto in tune with Soviet ideology and, as Ivan Susanin, the opera had a second, no less successful premiere in Moscow in 1939. Until the era of glasnost, this was the version of the opera most widely known, and it became a central repertoire work for the Belgrade Opera.

Fresh from a successful tour of Boris Godunov in Switzerland the previous year, the Belgrade Opera in 1955 was keen to make an impression on an international public. At the same time, the Decca company perceived a cost-effective but artistically assured opportunity to expand both its small but rapidly growing stereo catalogue (launched the previous year with Ansermet and the Orchestre de la Suisse Romande) and its opera discography with classics of the Russian opera repertoire which it had previously not been possible to record in the original language. In the event, the stereo versions were held back for the US market and only released in Europe in the 1960s, by which time the Belgrade Opera had acquired an international reputation for excellence thanks both to the mono issues and to its extensive touring schedule, which took in all the major European operatic centres.

The booklet for this newly remastered release includes both a synopsis and an essay giving full historical context to the Belgrade opera recordings.

The stereo sound is remarkable for its time ... Cangalovic is quite moving as Susanin prepares for the supreme sacrifice in his countrys cause.  Gramophone, June 1974