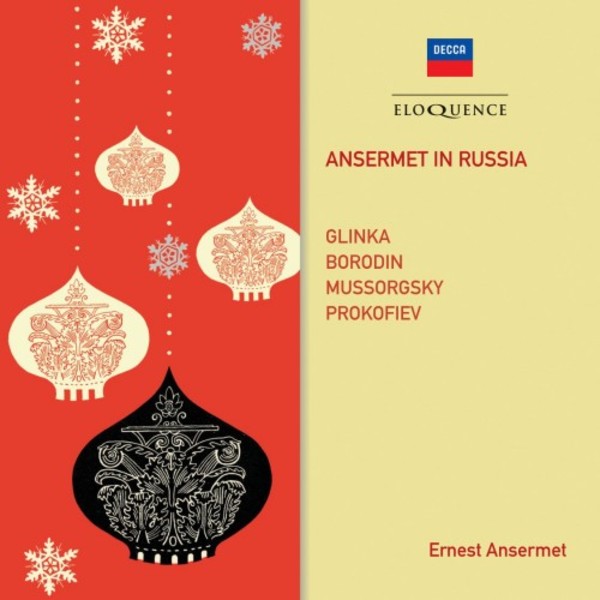 In the Steppes of Central Asia

A Night on the Bare Mountain (orch. Rimsky-Korsakov)
Pictures at an Exhibition (orch. Ravel)

The Love for Three Oranges, op.33

In the Steppes of Central Asia

A Night on the Bare Mountain (orch. Rimsky-Korsakov)
Pictures at an Exhibition (orch. Ravel)

The Love for Three Oranges, op.33

Russian music was always a fundamental part of Ansermets vast repertoire. Of course, he spent seven years as conductor with the famous Ballets Russes during a particularly glorious period for the company.

Numerous conductors worked with the Ballets Russes, and while some have been forgotten, others are still very much remembered  such as Pierre Monteux (who gave the first performance of The Rite of Spring, among other works), and particularly Ansermet who, from 1916 to 1923, was in the companys front line, conducting the first performances of such famous ballets as Saties Parade, Fallas Three-Cornered Hat, Stravinskys Song of the Nightingale, Pulcinella, Renard and Les Noces, and Prokofievs Chout.

But Ansermet knew and loved Russian music quite apart from the Ballets Russes. It was Ravel, a devotee of recent Russian music, who proposed the first movement of Borodins Second Symphony as the rallying cry of the Société des Apaches, a French artistic group formed in 1900, principally of musicians and writers. Ravel dedicated each of the pieces in his Miroirs for piano to a member of the Apaches. It should not be forgotten, too, how much of Mussorgskys Boris Godunov rubbed off on Debussys Pelleas et Melisande, or that the composer had, as a young man, been the piano-teacher of the children of Tchaikovskys patroness, Nadezhda von Meck.

Russian repertoire accounts for a large part of Ansermets discography, starting in New York in 1916, with extracts from works by Rimsky-Korsakov (Scheherazade and The Snow Maiden), Nikolai Tcherepnin (Le Pavillon dArmide), and ending in 1968 with the sumptuous recording with the New Philharmonia Orchestra of the complete Firebird ballet by Stravinsky, in the original 1910 version. In between, Ansermet made many recordings of Russian repertoire, including Tchaikovskys three great ballets, the Pathetique Symphony, and other works.

Other Russian composers included Borodin, Rimsky-Korsakov, Balakirev, Glazunov, Liadov, Rachmaninov, Prokofiev and, in first place of course, Stravinsky; Ansermet remains one of the major interpreters of his music. It is a source of joy, but also, at times, confusion, that the same works were recorded several times, as recording technology developed. What is striking is that Ansermets interpretations vary little from one version to another - which is not to say that he did not develop as an artist, but rather that he was a conductor with a matured, and considered concept of the work he was performing. This collection brings together Russian repertoire recorded at the very beginning of the 1950s, just before the invention of stereo.