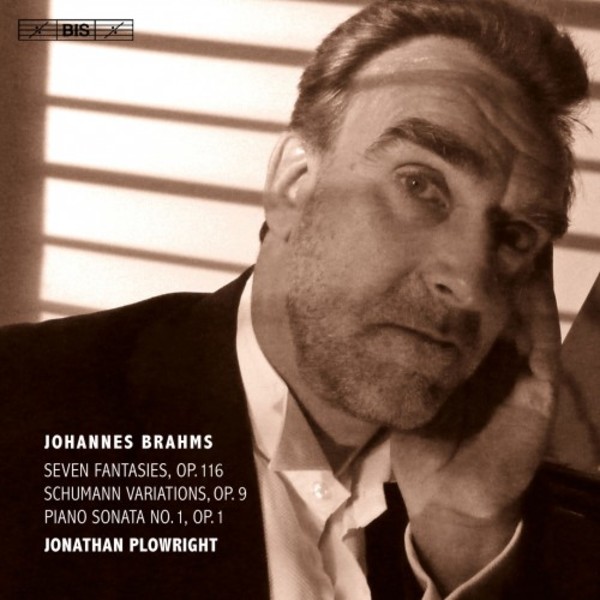 Having opened his survey of Brahms's music for solo piano with the third piano sonata, Jonathan Plowright has saved the composer's Opus 1, Piano Sonata No.1 in C major, for the closing disc in the series. Brahms brought the sonata with him when he went to Düsseldorf in October 1853 in order to meet Robert and Clara Schumann  an encounter which has gone down in music history. It was possibly the C major sonata, with its opening reminiscent of Beethovens Hammerklavier Sonata, which caused Schumann to liken Brahms to a young eagle and a true apostle.

Very soon after the meeting, Schumanns mental health began to decline, to the point of him attempting suicide in February 1854. Composed in the same year, Brahmss Op.9 Schumann Variations were closely connected with these events and with Robert and Clara. Brahms chose a theme  from Schumanns collection Bunte Blätter which Clara herself had composed a set of variations on, and dedicated it to her. Schumann died, hospitalized, in 1856, but Clara and Brahms remained intimate friends and some forty years later, Clara was one of the first persons to whom Brahms showed the newly composed set of Fantasies, Op.116: wonderfully original was her reaction, and later performers and listeners have agreed with her.

Jonathan Plowright has been described as a true and moving poet of the keyboard by Gramophone and his Brahms cycle has received critical acclaim, with instalments being singled out in Gramophone (Editors Choice), BBC Music Magazine (Instrumental Choice of the Month) and on ClassicsToday.com (10/10).