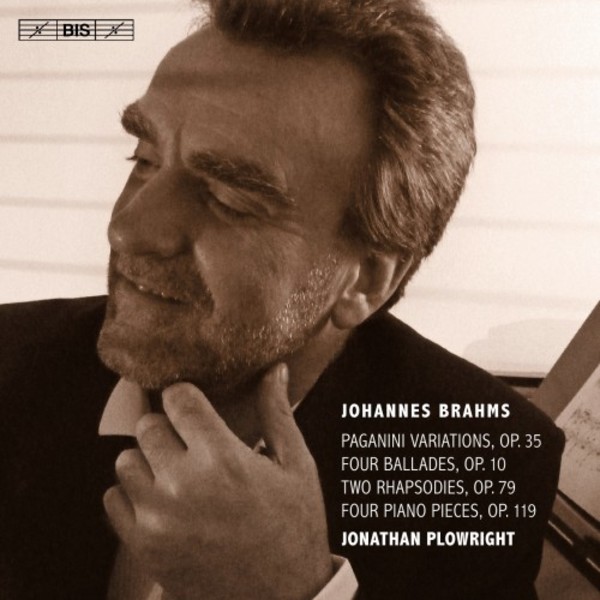 The theme of Paganinis 24th Caprice for solo violin has tempted a number of composers to elaborate on it  from Liszt to Lutosławski and Andrew Lloyd Webber. In 1863, Johannes Brahms was one of the first to take on the challenge, with his virtuosic Paganini Variations. Playing the set has famously been described as requiring fingers of steel, a heart of burning lava and the courage of a lion and possibly the demands that they place on the performer is the main reason why Brahms organized his 28 variations into two books of 14 each.

For the fourth instalment in his series of Brahmss piano music, Jonathan Plowright has chosen to place the two books at either end of the programme. Between them we are presented with works spanning almost 40 years of Brahmss life. Of the four Ballades from 1854, it is only for the first, the so-called Edward Ballade, that a model in literature is known  a Scottish ballad about the murder of a father. The set has nevertheless been compared to the slow movements in Brahmss three piano sonatas, composed around the same time, and all with literary references. 25 years later, Brahms had entered a phase where his works for piano were growing ever shorter and more concise, but with his Op.79 Rhapsodies he made something of a return to the grandeur and passion of his early piano writing. This development was short-lived, however, and the following works for solo piano, of which the four Piano Pieces of Op.119 from 1893 would be the last, have been compared to the golden lustre of parks in autumn and the austere black and white of winter walks. Previous discs in Jonathan Plowrights survey have received critical acclaim worldwide, and the series has already been dubbed the benchmark Brahms survey for some time to come in Gramophone.

As we reach Volume 4 of this complete solo Brahms traversal, theres no doubt that Jonathan Plowright and old Johannes are on the best of terms. The programming of works from different stages in Brahmss career points up the way earlier pieces can foreshadow his late style. ... The disc is bookended by the two volumes of Paganini Variations. Even Brahmss most strenuous technical demands hold no fears, the abundant thirds and sixths of Vars 1 and 2 (Book 1) given with an almost airy ease. But more telling still is the sense of playfulness that Plowright brings not only to the theme itself but to myriad variations, which means that the points of stillness (Book 1, Vars 11 & 12) have a truly transcendental air.  Harriet Smith
Gramophone April 2017