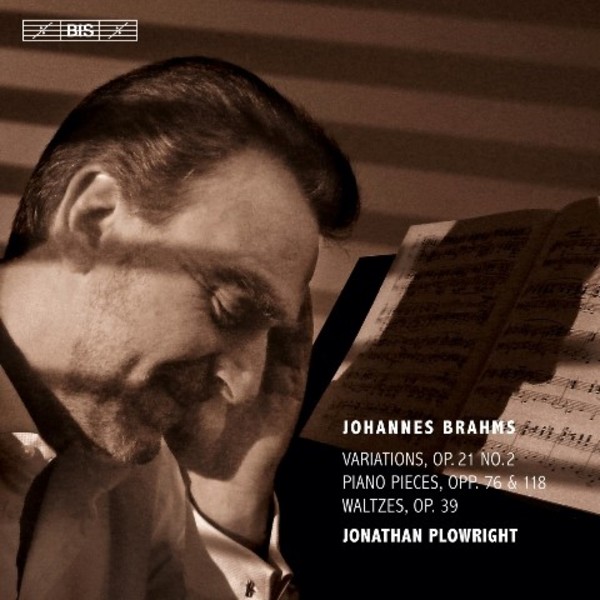 Critical acclaim for Jonathan Plowright's two previous discs in his series of Brahms works for solo piano includes distinctions such as 10/10 on the website Classics Today and top marks in Diapason as well as Instrumental Choice of the Month in BBC Music Magazine.

On his third disc, Plowright presents the listener with two seemingly contradictory aspects of Johannes Brahms: the deeply serious, emotionally charged, but also meticulously constructed late Piano Pieces of Op.118 and their precursor Op.76 appear side by side with the unapologetic extroversion and scintillating verve of most (if not all) of the 16 Waltzes Op.39, and the flamboyant Variations on a Hungarian Melody.

Brahms fascination with Hungarian gypsy music stemmed from his friendship with the violinist Eduard Reményi, and found an outlet in several works, among which the Hungarian Dances are probably the most famous. The composer was also a friend and admirer of Johann Strauss II, and in his Op.39 trespassed  with great success  into the domains of Vienna's 'Waltz King'.

It is tempting to think that Brahms' early experience as a pianist in taverns and restaurants induced him to compose this sophisticated light music, but there were also commercial reasons: he composed the waltzes for piano four hands and subsequently made no less than two arrangements for solo piano of the entire set.

This third volume in Jonathan Plowrights series of recordings of Brahmss piano works lives up to the high promise of the first two ... Plowrights pacing of the waltzes is masterly, his articulation is pellucid, and his touch poetically suggestive. ... The masterpieces of Op. 118 are delivered with fiery splendour.  Michael Church
BBC Music Magazine May 2016

One thing that makes Plowright's interpretations so compelling is that they sound totally fresh... unencumbered by conventional approaches or received wisdom... The results are often unexpected, yet always apt and never less than convincing... I have a feeling this is going to be the benchmark Brahms survey for some time to come. Patrick Rucker
Gramophone February 2016