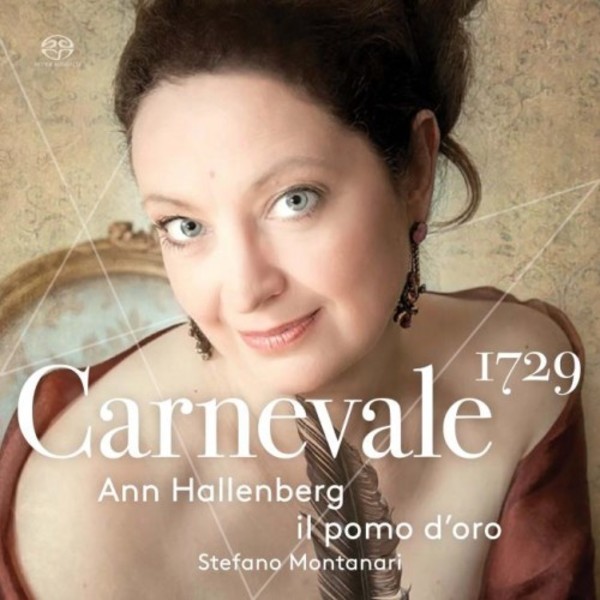 » Nave altera the in mezzo oll'onde

» Nave altera the in mezzo oll'onde

The Carnival of Venice in 1729 was quite unlike any other. Over a period of two months, opera houses went into a frenzy of competition to show off the most famous singers of the day, including the legendary castrato Farinelli who made his astonishing Venetian debut. Several of the most fashionable composers rose to the occasion, writing ravishing music for spectacular productions which often pitted the singers against each other in breathtaking displays of virtuosity. The results were sensational; one tour de force followed another in an atmosphere of fevered excitement and the adoring public lapped it up.

The critically acclaimed II pomo d'oro is an Italian baroque ensemble founded in 2012 with a special focus on opera with authentic performances on period instruments. They have recorded 15 albums including the world premiere recording of Leonardo Leo's Catone in Utica.

Ann Hallenberg is a much in demand Swedish mezzo-soprano and has recorded over 40 CDs, her solo CD Agrippina winning the award for best operatic recital at the International Opera Awards in May 2016.

The baroque violinist and conductor Stefano Montanari is a much sought after guest conductor with both modern and period orchestras. He is regarded as one of the finest baroque violin virtuosos of his generation. His recording of Corelli's Violin Sonatas op.5 won a Diapason d'Or and he was nominated for a Grammy Award for his recording of Purcells O Solitude with Andreas Scholl for Decca.

"The excellent musicians of the fantastic period-instrument ensemble ... get it all perfectly right: every tone, every phrase, coloratura and accompaniment" - Süddeutsche Zeitung

Collective virtuosity is the lifeblood of Baroque music. Hallenberg is dazzling, but as part of a shared project. This performance brings us music never heard before, exceuted with a rare intensity.  Berta Joncus (Recording of the Month)
BBC Music Magazine September

[Handels] erstwhile diva Faustina and castrato Senesino played the principal parts in Orlandinis Adelaide, and arias from each role might as well have been tailor-made for Hallenbergs pinpoint virtuosity and lyricism, communicative use of language, idiomatic embellishment, intelligently sculpted phrasing (limpid, gentle or turbulent as the music demands) and astute theatrical characterisation... Sweetly tender solo oboe and pizzicato strings are judged beautifully in Mi par sentir la bella from Giacommelis Gianguir, and there is zestiness in two quick arias from Albinonis Filandro.  David Vickers
Gramophone Awards 2017

This amazing collection of showstopping hits from a single season, 1729  almost all world premiere recordings  features unknown composers Orlandini and Giacomelli alongside the slightly better known Leo, Vinci and Porpora, while Albinoni wins on melody in two numbers from his Filandro.  Ann Hallenberg dazzles with sensational virtuosity and warm tone that is straight as a die, and Il pomo doro supports brilliantly.  Nicholas Kenyon
The Observer 9 July 2017

Her [Ann Hallenbergs] range, with astonishing evenness of tone and voluptuous colouring, extends from contralto to soprano, and her sublime artistry keeps the attention even during Orlandinis rapt Quanto bella agliocchi miei, which, at nearly 15 minutes, is longer than any Handel aria. Her technical bravura leaves one almost breathless in the same composers Scherza in mar la navicella and in Vincis Nave altera che in mezza allone, from Labbandono di Armida. Hallenbergs alchemy turns this accomplished music to 24-carat gold.  Hugh Canning (Album of the Week)
The Sunday Times 2 July 2017