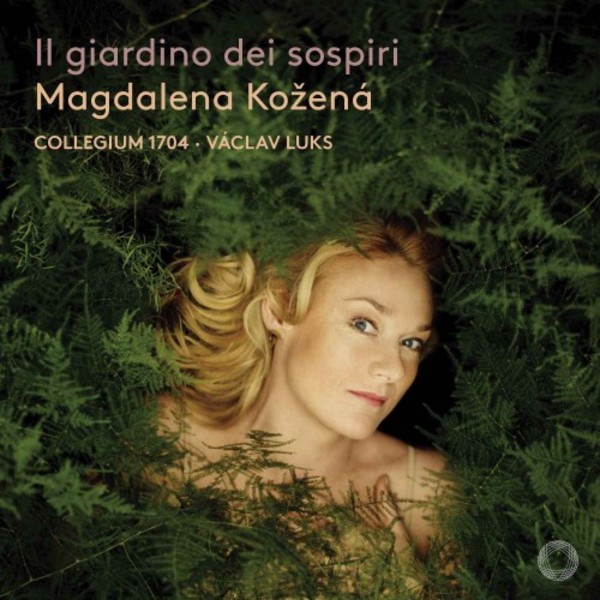 On her first PENTATONE album, Czech star mezzo-soprano Magdalena Koená returns to the baroque repertoire that launched her early career.

Magdalena Koenás new disc on the Pentatone label owes its initial conception to the imagination of the late opera designer Karl-Ernst Herrmann (1936-2018), who came up with the idea of a journey through the labyrinth of human emotions, as well as through the Italian landscape, via the medium of the Italian Baroque cantata. Sadly his health did not permit the realisation of the project on stage, but instead Koená, brilliantly partnered by the Prague period-instrument group Collegium 1704 under its director Václav Luks, has transferred the concept to disc, and the result is one of 2019s most engaging discs so far.

The Italian 18th-century cantata is a better-known genre than it used to be, largely thanks to a number of excellent recordings in recent years. But Koená and Luks manage to turn up some works that are still rarities, starting their journey in Venice with Arianna abbandonata by Benedetto Marcello (1686-1739). The classical myth of Ariadne abandoned on Naxos by Theseus only to be wooed by Bacchus is an enduring one that has enjoyed some memorable musical treatments. Marcello was a Venetian nobleman and amateur composer with conservative tastes, yet what he lacked in lyrical flair he made up for in inventiveness. After a stylishly performed opening sinfonia in three movements, an intensely felt recitative with sustained strings and brooding plucked continuo outlines Ariadnes plight. The central slow aria, complete with Vivaldian harmonic sequences, hits home here thanks to some deftly deployed harmonic shading and Koenás clear yet gently caressing vocal line, while the strikingly upbeat concluding aria suggests that Ariadne is already anticipating the imminent arrival of Bacchus.

Another three-movement sinfonia, from Leonardo Vincis Neapolitan oratorio Maria dolorata, leads to a powerful performance of the multi-section aria Ombre, cure sospetti, from Francesco Gasparinis Venetian oratorio Atalia (1696). Here Koená gives a masterclass in presenting a range of emotions and tones to express Atalias torment and anxiety at having ordered the murder of her descendants. It will have you on the edge of your seat.

The listener is then transported to Naples for the pastoral idyll of Angelica e Medoro by Leonardo Leo (1694-1744). Its gentle vocal lines are stylishly unfolded by Koená, while Luks and his musicians make the most of the plentiful nature allusions in the exceptionally vivid instrumental accompaniments, while the concluding aria Che detto avranno mai hints at the unspoken joys (and pains) of the two lovers in a performance that clearly relishes the musics lightly-worn elegance.

All roads, it is said, lead to Rome, and that is where this musical journey leads too, in the form of Qual ti riveggio, HWV 150 (1707), one of Handels finest solo Rome cantatas, composed for Cardinal Pietro Ottoboni. The action itself takes place at the strait of Hellespont where the lovers Ero and Leandro meet every evening, Eros lantern guiding Leandro across the strait. But the lantern has been blown out, and Leandro has drowned, giving rise to a memorable sequence of emotional outpourings that prompt some of the young composers most striking ideas, before Ero throws herself into the depths. Here Koená, Luks and Collegium 1704 are at the top of their game, in a performance that brings out the beauty as well as the expressive immediacy of Handels music. A particular highlight is the vigorous, boldly inventive, gavotte-like central aria Se la morte non vorrà, oboes adding incisiveness to the sound without any loss of beauty. The third aria, Si muora, si muora, which precedes the closing recitative, is almost unbearably intense, setting the seal on an outstanding performance from the Czech mezzo.

Thoroughly researched, lovingly performed and recorded, and with a judicious selection of purely instrumental sinfonias to balance the high emotions of the vocal numbers, this is a peach of a disc that will delight Magdalena Koenás many admirers as well as all lovers of Baroque music.

Koená has chosen with care, presenting a really delectable selection of rarities that all make their case. ... Václav Luks and his Prague-based Collegium 1704 are exemplary collaborators, relishing the unexpectedly flighty, flirtatious string-writing of Vincis Sinfonia from Maria dolorata and the vivacious opening to the Marcello, always alive as accompanists to the shifting currents of these musical streams of consciousness.  Alexandra Coghlan
Gramophone July 2019