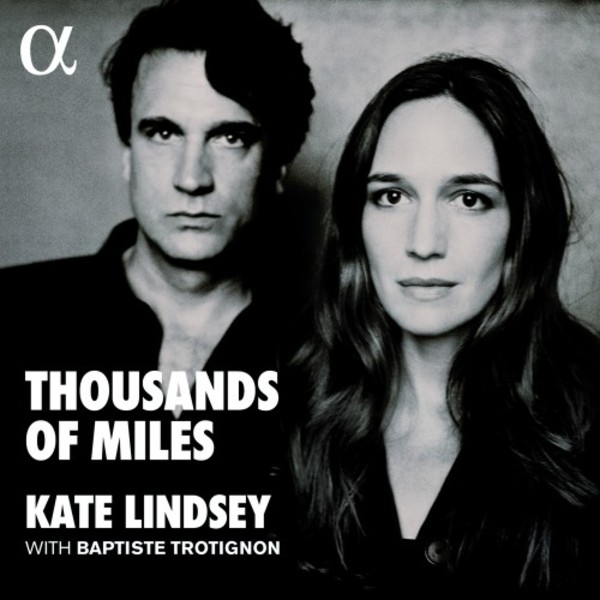 » Lonely House
» We'll go away together

» Lonely House
» We'll go away together

Closing the distance between classical music and Broadway, between the old world and the new, this album is born out of a stunning encounter between two performers. Kate Lindsey is an opera star whose career is skyrocketing. She has stunned audiences with her performances of Mozart and Purcell. Baptiste Trotignon is a multi award-winning jazz pianist who plays with big names like Brad Mehldau and Tom Harrell, but who has a long-held interest in classical music, even composing a piano concerto for Nicholas Angelich. Together, they have produced a rich and varied programme around the songs of Kurt Weill, from Nannas Lied to Trouble Man, and classics from The Threepenny Opera and Lost in the Stars.

This journey through three European languages brings the listener to the very beginnings of jazz, and features all-new arrangements and deft improvisations by pianist Baptiste Trotignon. Lindsey and Trotignon also pay homage to three composers who, like Weill, all emigrated to the United States: Alma Mahler, Zemlinsky and Korngold. London-based American mezzo-soprano Kate Lindsey joins Alpha Classics for several recordings over the coming years.

a stunning encounter between two performers

The French Alpha label, part of the Outhere group, is best known for its sumptuous recordings of a wide range of early music  everything from the middle ages to 19th-century Romanticism. But it also hosts many unexpected delights, and one of these is its latest song recital disc, Thousands of Miles. This is much more than just another Kurt Weill collection, ranging from his classic Berlin works to music from his Broadway exile. For a start, it includes a generous helping of pieces from three other composers who, fleeing the darkness of the Nazi regime, made the move from central Europe to the United States: Alma Mahler, Alexander Zemlinsky and Erich Wolfgang Korngold. And then there are the performers themselves: fast-rising American mezzo-soprano Kate Lindsey, who has already made her mark in some notable opera recordings, and renowned French jazz pianist Baptiste Trotignon. Judging not just by the artists interview comments (see video) but by the all-important recorded results, its an unlikely match that has really paid off, for this is one of the most compelling and striking song discs to have appeared for quite a while.

Weills output may be inextricably linked with the singing of Lotte Lenya and, in more recent years, Ute Lemper, but when a classically trained singer approaches this repertoire with a mixture of technical élan and musical imagination, the results, as here, can be stunning. Kate Lindsey perfectly captures the downtrodden but defiant spirit of Weills heroines, carefully deploying irony when called for, but taking the sort of care over tone and text that one would normally associate with high-end Schubert performances. Some of the songs  like Trouble Man from the musical Lost in the Stars  are truly harrowing, while others, such as Big Mole from the same show, bristle with quick-fire humour and dazzling technique. In these numbers, as in Buddy on the Night Shift, Lindsey is predictably idiomatic; more welcome, though, is that she is obviously just as much at home with the German texts of such classics as Nannas Lied and the Barbara Song from Die Dreigroschenoper.

Another standout feature of the disc is Lindseys vocal range  not just across the stave, from deep-throated huskiness to soaring high notes, but dynamic and tonal as well. This is memorably evident in the old-world charms of Alma Mahlers Hymne and Die stille Stadt, but above all in the extraordinary focus at hushed dynamic levels in Korngolds Mond, so gehst du wieder auf, and Zemlinskys Selige Stunde, which brings the recital to its beautifully poised close. This is a striking vocal instrument that is not just destined for great things but already accomplishing them.

Trotignons contribution to the discs success is likewise considerable. He not only matches Lindsey in the range of tone and constant sensitivity to nuance, but has recast several of the Weill accompaniments, many of which in their published form have the appearance of workaday reductions rather than true performing scores. Numbers like the title track, Thousands of Miles are transformed by his jazz artistry into musical jewels, and his deft touch graces even the straight classical works: his voicing of the chords that launch Zemlinskys Und hat der Tag all seine Qual, for example, is exquisite.

Even those for whom Weills high stylisation is normally a closed (song)book should investigate this disc as a matter of urgency. As an imagination combination not just of repertoire but of artists, too, its well-nigh unbeatable, an astonishing tribute to a golden era of song, and an artistic triumph.

... the Broadway numbers [are] sung with wonderful understatement and great emotional perception. Trouble Man and Lonely House are high points on a disc where less frequently means so much more. Were reminded of Stratas, though Lindseys stylistic range is wider...  Tim Ashley
Gramophone September 2017

The range Kate Lindsey displays on her new disc Thousands of Miles is astonishingly varied. The recital is a brilliant Vienna Secession-meets-jazz-meets-Broadway programme of Weill, Zemlinsky and Korngold
Opera Now July 2017

The American mezzo Kate Lindsey bucks the trend on her new recital for Alpha Classics, increasingly the go-to label for exciting projects with intelligent young artists. She unleashes a chesty alto register on the opening Brecht number, Nannas Lied, while her ripe delivery of Denn wie man sich bettet, so liegt man, from Brecht and Weills Mahagonny, has shades of Dietrich herself. Lindsey never sounds as if shes dragging her voice anywhere it doesnt want to go. She is incisive with text, in German and English alike, and on one Weill number written for the cabaret star Lys Gauty, Je ne taime pas, her French is just as impeccable.  Neil Fisher
The Times

Heres an opera-singer-goes-off-piste CD thats unusually rewarding. Mezzo-soprano Kate Lindsey and jazz pianist Baptiste Trotignan form a fruitful partnership for a programme centred on Kurt Weill writing from both sides of the Atlantic. Lindseys assimilation of the style sounds near effortless, and only occasionally does she give the feeling she has anything to prove. The first song, Nannas Lied, has her voice turning on a sixpence from Weimar drawl to a Lieder-singers poise and back again.  The disc also takes in some little gems by other Austrian-born émigrés. Korngolds Mond, So Gehst Du Wieder Auf is a highlight; so is Alma Mahlers Hymne, which unleashes Lindseys full classical voice, and glorious it is, too.  Erica Jeal
The Guardian 15 June 2017