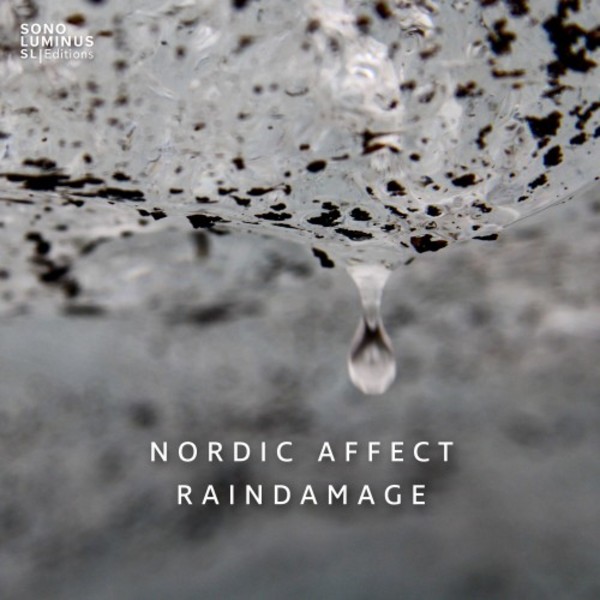 Raindamage is the fruit of artistic collaboration, a kind of a micro lab exploring the creative possibilities and processes involved in the making of an album. It is an attempt to unpack the tacit processes of musical collaboration and immediately raises the question: how do you crack them open in order to gain a further insight, which in return can lead to new ways of doing?

At the heart of Raindamage are the most valuable systems of all: the collective and the collaborative. The Raindamage narratives are of course as many as the participants. In my instance, the continual tossing of the creative ball between my generous friend and colleague Valgeir Sigurðsson and myself, led to the creation of V A R P, an installation room which invites you into the nesting site of Raindamage: a space for ecological navigation. V A R P had its premiere already in November 2016 in Sweden, before the album release. This only goes to show the fast changing work paradigm here at the cusp of the 21st century. An unreleased album had already become a new work.

Valgeir Sigurðsson is an Icelandic composer and producer. As the editor and curator of the Bedroom Community label he founded in 2006, his work with the likes of Nico Muhly, Ben Frost, Paul Corley, Sam Amidon and Daníel Bjarnason features a constantly evolving appreciation of the diversity of music in the world. His collaborators have included Björk, Bonnie Prince Billy, Feist, Damon Albarn, CocoRosie, Sigur Rós, Jóhann Jóhannsson, Brian Eno, Tim Hecker, Anohni, Oneohtrix Point Never and Alarm Will Sound.

Hlynur Aðils Vilmarsson has enjoyed a diverse career in music, be it as a member of Icelandic rock bands or the composers collective s.l.á.t.u.r. Infused with a passion for experimentation, his work has also extended to the realm of technology within the platform of LornaLab (Reykjavík Media Lab).

Úlfur Hansson made his mark on the music scene as an electronic music producer, live-improviser, orchestral composer and sound artist. Hansson graduated in composition from Mills College (CA), and his work earned him a win as young composer at the 2013 International Rostrum of Composers. Commissions have included works for the Tectonics festival curated by Ilan Volkov and the Kronos Quartets project Fifty for the Future.

Icelandic ensemble Nordic Affect has been hailed for its affectionate explorations (BBC Music Magazine) and commitment to their repertoire (Classical Music). Founded in 2005, Nordic Affect was formed by a group of period instrument musicians who were united in their passion for viewing familiar musical forms from a different perspective and for daring to venture into new musical terrain. In 2013, the ensemble was nominated for the Nordic Council Music Prize and was named Performer of the Year at the Iceland Music Awards in 2014.

Believing that music knows no boundaries, Nordic Affect has brought its music-making to contemporary and rock audiences alike and performed to critical acclaim at festivals such as TRANSIT festival (BE), Dark Music Days (IS), November Music (NL), BRQ Vantaa Festival (FI), Estonian Music Days (EE) and Iceland Airwaves (IS). Its members have individually performed and recorded with artists and groups such as The English Concert, Concerto Copenhagen, Anima Eterna Brugge and Björk.

Decades ago the Sugarcubes proved to the rest of the world that Icelandic rock was its own original creation - now Nordic Affect promises to do the same for the countrys newmusic community.  The Chicago Reader

Taking risks, buoyed by collaborative support, contributes to a developing, changing self. Through collaboration we can transcend the constraints of biology, of time, of habit, and achieve a fuller self, beyond the limitations and the talents of the isolated individual.  John-Steiner, 2000