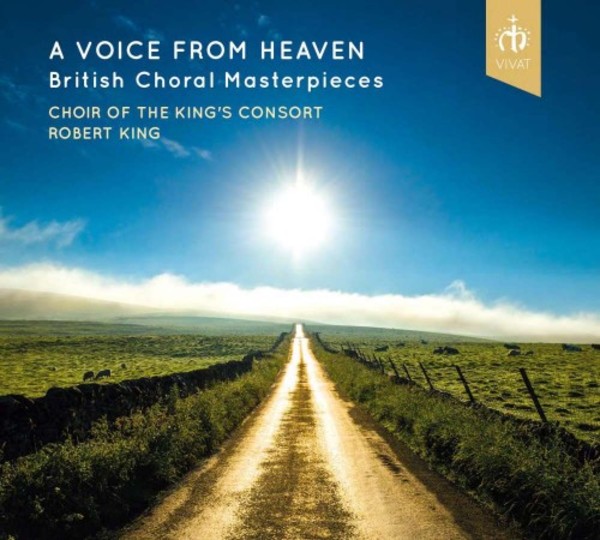 A beautifully themed collection of fourteen of the finest unaccompanied British choral masterpieces of the last 125 years performed by the award-winning Choir of The Kings Consort.
The fascinating mix of familiar and unfamiliar includes five paired settings: William Harriss classic 1959 Bring us, O Lord God partnered by James MacMillans 2010 setting of the same words; Herbert Howellss devastatingly poignant Take him, earth, for cherishing (in memory of the slain President Kennedy) juxtaposed with John Taveners 2008 response to the same text; Justorum animae (The souls of the righteous) in versions by Lennox Berkeley, Charles Villiers Stanford and Herbert Murrill; heartfelt settings of Drop, drop, slow tears by Kenneth Leighton and Thomas Hewitt Jones; and Stanfords beautifully crafted I heard a voice from Heaven coupled with Herbert Howellss exquisite, mystical setting of the same words.
The collection is completed with three impressive single works: Parrys valedictory Lord, let me know mine end, William Harriss masterwork Faire is the Heaven, and a stunningly powerful recording of John Taveners Song for Athene, which sprang to global fame when performed at the funeral of Diana, Princess of Wales.
Recorded in the well-nigh perfect acoustic of St Judes Church, London, by the award- winning production team of David Hinitt and Adrian Peacock.

The latest release from the Kings Consorts Vivat label is one of their most thought-provoking yet. Made possible by support from the family of the late Harry Johnson (including his son, the renowned baritone David Wilson-Johnson), the disc has as its main theme the afterlife, preparation for it, and the commemoration of the departed. If the idea thus summarised seems somewhat sombre, the musical responses from a succession of British composers of the last hundred or so years contain some of the greatest riches of the British choral revival, spanning from Stanford and Parry via Harris and Howells to Tavener, MacMillan and Thomas Hewitt Jones. Alongside such a cappella favourites as Harriss Faire is the heaven and Howellss JFK Elegy Take him, earth, for cherishing, are other jewels other jewels like Herbert Murrills The souls of the righteous and Taveners mesmeric Song for Athene.

But theres much more to this disc than just a string of gorgeous neo-Romantic works on the theme of death and the hereafter. The choirs conductor Robert King has chosen to include in the programme five paired settings: the same texts, set by two (and, in one case, three) different composers. Its a brilliant idea, vividly illustrating the contrasting, yet always sympathetic and often complementary compositional responses of musicians to classic texts across the years. Hearing, for instance, Stanfords gently comforting Victorian setting of I heard a voice from heaven juxtaposed with the more probing harmonies of Howellss version from his Requiem of the 1930s is to experience the same text (from the biblical Book of Revelation) illuminated from two distinctive viewpoints, enriching the experience of both pieces. The same applies to Taveners astonishing version of Take him, earth, for cherishing, with its magical semi-chorus, side-by-side with the exquisitely intense Howells version.

Other stand-alone works include Parrys Lord, let me know mine end, the psalmists outburst of Take thy plague away from me sounding startlingly modern in this animated performance. MacMillans brilliant version of Bring us, O Lord (following straight on from Harriss classic setting) and Joness finely honed Drop, drop, slow tears show the state of church music composition to be in rude health, nurturing new textures and harmonic avenues while maintaining an expressive thread that stretches back over a century.

As for the performances themselves, you wont hear better in this life. Robert King has placed the tenors and basses at the centre front of the choir, giving the choral sound an extraordinary grounded richness which emphasises the intensity of human emotion over detached, otherworldly qualities. And the singing in all voices is simply superb, with youthful-sounding upper sopranos of the greatest clarity and light, and several fine solo contributions to boot. The recording, made in the Lutyens-designed church of St Judes, Hampstead Garden Suburb, is a perfect match for the performances, with just the right degree of radiance and warmth to the sound. And the great crescendo in the closing Song of Athene is completely overwhelming, stunningly delivered.

Theres an almost missionary zeal to all of Robert Kings projects, and this one is no exception. The expressive intensity of the performances is infectious and completely compelling, every track delivered with total musical commitment. Incredibly, this is first completely unaccompanied recording of the Choir of the Kings Consort (who normally work with their instrumental colleagues), and it is a truly remarkable achievement. Compulsive listening for all lovers of the great British choral tradition.

Recorded in the Lutyens church of St Judes, Hampstead, this album of unaccompanied British choral works shows the 28-strong Choir of the King Consort, especially known for baroque performance, in a rich, lushly romantic light. Texts in more than one version (as with Bring us, O Lord God and Drop, Drop, Slow Tears), are set by 11 composers from the past 120 years, from Stanford and Parry to James MacMillan and John Tavener.  Fiona Maddocks
The Observer 25 September 2016