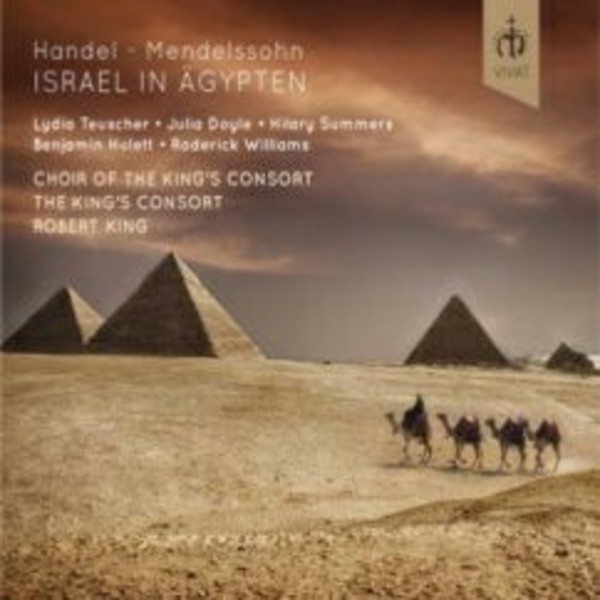 During five days of recording in Londons famous St Judes, Hampstead Garden Suburb, 85 orchestral musicians and chorus  including period instrument specialists from eleven nations  will recreate a forgotten sound world for the Vivat label. Since its launch in 2013, Vivat has produced a series of classical CD recordings which have been acclaimed across the globe.

In 1739 Handel composed a vivid oratorio, Israel in Egypt, depicting the Israelites struggle for release by an obdurate Egyptian Pharaoh. Handel brilliantly colours the Old Testament story which recounts the series of plagus sent to remind Pharaoh of his broken promises. Frogs, blotches, swarms of flies, hailstorms, a murky darkness and finally the striking down of all the first-born of Egypt persuade Pharoah to release the Israelites. When Pharaoh again changes his mind, the Red Sea miraculously parts to let the Israelites cross, but swallows up their pursuers. Finally, in music of great grandeur, the Israelites celebrate their deliverance. Handel has rarely been so inspired!

Little wonder then that, in 1833, when the great composer Felix Mendelssohn discovered Handels 1739 score, he gathered together what materials he could to perform it. He made significant changes, composing his own brilliant overture, adding and cutting movements, and also radically changing the orchestration. Mendelssohns score too fell into near-oblivion, but was reconstructed over two years from original surviving manuscript sources by Robert King for performance in 2014 at the Mendelssohn Festival at Leipzig Gewandhaus  the city in which Mendelssohn founded and conducted the famous orchestra of that name. A critical and artistic success, that performance will now be recorded for CD and released in Spring 2016, with an international line of soloists (Lydia Teuscher, Julia Doyle, Hilary Summers, Ben Hulett, Roderick Williams), the Choir of The Kings Consort and the large and colourful period instrument orchestra The Kings Consort, under the baton of Robert King.

With its lavish succession of great choruses and dramatic narrative, its no wonder that Israel in Egypt should have become one of Handels most popular oratorios. Long a staple of English choral societies, it was introduced to German audiences in 1831 by Felix Mendelssohns influential teacher Carl Friedrich Zelter (1758-1832) when he performed it (in a German translation) with the Berlin Singakademie. When, two years later, the Lower Rhine Music Festival in Düsseldorf decided to mount the work as part of their 15th festival, Mendelssohn was a natural choice for conductor; Zelter had died in 1832, but in 1829 the precocious twenty-year-old Mendelssohn had already mounted his historic Berlin revival of Bachs St Matthew Passion. With an enthusiasm for Handel that matched that for Bach, Mendelssohn proved a superb choice. While in London during spring 1833, he even unearthed recitatives and arias for Israel in Egypt that were not in the printed scores being used for the Düsseldorf performances. A few weeks after the first Düsseldorf performance, on Whit Sunday (26 May 1833), Mendelssohn directed (from the piano) a selection of choruses from Israel in Egypt, which were accompanied by a series of tableaux vivants illustrating scenes from the Exodus story. And between 1836 and 1844 he performed the work four more times, making it the most frequent of his Handel revival projects.

Mendelssohn was not alone in studying the works of his musical forebears (both Mozart and Beethoven were keen admirers of the Baroque masters), but he was the first to put that study into practice by reviving neglected large-scale works. That makes him an entirely appropriate choice for todays historically inquiring musicians, and Robert King, together with the enlarged Kings Consort, does a splendid job in reconstructing Mendelssohns 1833 version of Israel in Ägypten (as it is in German). Although recognisable as Handels masterpiece, Mendelssohn wrought extensive and often far-reaching changes on the work. Apart from the change to a German text, the absence of an organ for most of Mendelssohns own performances meant that the recitatives were accompanied instead by a pair of double-stopped cellos underpinned by a double bass: the first recitative (Nun kam ein neuer König) survives in this adapted form, and King has applied the same principle throughout the work, a striking transformation to the sound-world. In the arias and choruses, sparer passages that would have been filled out by the keyboard continuo are instead enriched by attractive-sounding clarinets, and Mendelssohn brought his skill as an orchestrator to bear throughout the score, sensitively introducing new colours (as in the Part I chorus Er sandte dicke Finsternis (He sent a thick darkness)).

Mendelssohn made a few judicious cuts, but also reassigned some arias and recitatives, and even incorporated a lovely duet from one of the Chandos anthems in Part II (Die Himmel sind dein). The effect on nineteenth-century German audiences must have been impressive indeed. Most drastic of all, Mendelssohn provided his own instrumental introduction to the work: none other than his early Trumpet Overture of 1826, a splendidly spirited work, now with added trombones, a few cuts, and a revised ending to lead more effectively into its new context. Its pure Mendelssohn, and a really striking opener to proceedings.

The results in this recording are a triumph of both scholarship and performance. Robert King has been fastidious in his reconstruction and research, using instruments, techniques and phrasing appropriate to the 1830s. Adopting lively speeds and buoyant rhythms, this 19th-century version of the Baroque sounds surprisingly like the real thing in many respects, yet the devil is in the detail. Listen carefully, and everything from bow-strokes to trills and portamento has been carefully thought-through and realised with utmost care. Soloists are excellent, not least sopranos Lydia Teuscher and Julia Doyle, who respectively sing in a pair of utterly captivating arias in Part II (So dachte der Feind and Aber du ließest wehen). The orchestra, too, is superb, with woodwind and brass in particular bringing an appropriate period flavour to the music, and some well-defined timpani playing. Above all, its the choir of the Kings Consort (with 36 voices, somewhat smaller than used by Mendelssohn) that makes this unique recording of Israel in Ägypten so thrilling: incisive, impassioned and dramatic, especially vivid in the plagues of Part I, and enhanced by a perfectly-judged recording.

The presentation is exemplary: an historical introduction by Mendelssohn expert R Larry Todd, and a detailed essay on the version and its reconstruction by Robert King himself, illuminated by reproductions from the relevant scores and manuscripts. Altogether hugely impressive.

With his vast Handelian experience, King ensures that Handels mighty series of choral frescoes emerge in all their brilliance and incisiveness, aided by a carefully judged choral-orchestral balance. ... the singers and players respond with sadistic relish to the various plagues conjured up by Jehovah at his most repulsively rampant, using the hardness of the German consonants to heighten the cruelty of Er schlug alle Erstgeburt (He smote all the first-born). ... In sum, a vividly realised snapshot of a fascinating historical moment, its attractions enhanced by a lavishly produced booklet containing detailed notes by King and Mendelssohn scholar Larry Todd.  Richard Wigmore
Gramophone April 2016

Mendelssohn famously revived Bachs St Matthew Passion, but he was also fascinated by the music of Handel, having studied his music on a visit to London in 1829. In 1833 he revised, reorchestrated and semi-staged (with a series of tableaux vivants) Handels great Old Testament oratorio Israel in Egypt. It has now been reconstructed by Robert King, and the results are fascinating  burbling clarinets supply continuo, added solo recitatives fill out the sequence of choral movements, and a totally Mendelssohnian overture now kicks off the story. Handels masterly depictions of frogs, plagues and other natural disasters in his choruses are enhanced (though with German texts) in this feisty performance.  Nicholas Kenyon
The Observer 6 March 2016