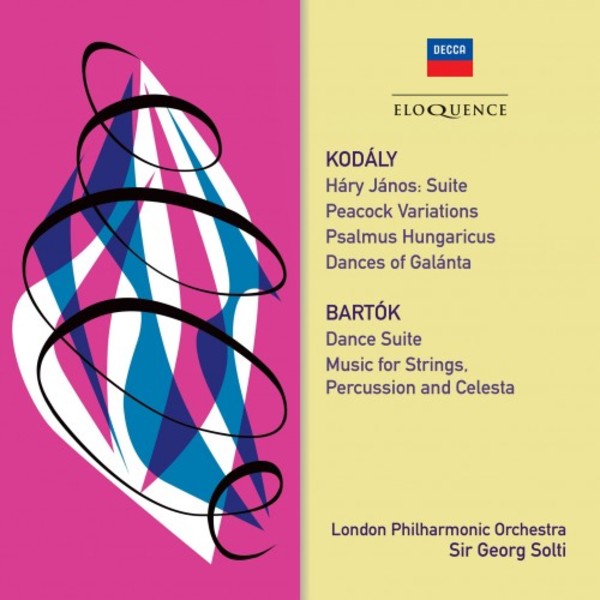 Georg Solti studied piano with Bartók and although they never developed a close personal relationship, Solti was always in awe of the composers dedication and intensity. Bartóks music featured regularly in Soltis concert programmes and he recorded the Music for Strings, Percussion and Celesta and the Dance Suite again for Decca.
This 1952 recording of the Dance Suite with the London Philharmonic Orchestra was one of his earliest orchestral discs and the conductors instinctive sense of rhythm is ever-pervasive. There are also some delightful touches of humour to be encountered in these recordings, such as those in Kodálys Háry János Suite.
Kodálys Psalmus Hungaricus was the first work to bring him international recognition, and it also brought him back into favour at home. It was composed to celebrate the fiftieth anniversary of the unification of the cities of Óbuda, Buda, and Pest to form modern-day Budapest. Solti revisited both the Peacock Variations and Psalmus Hungaricus 43 years after the present recording, in June 1997. This 1954 recording of Kodálys choral masterpiece is performed in English.
Orchestra and chorus shine in the Psalm [...] Georg Solti is to be congratulated on two such vital readings - Gramophone, October 1954 (Psalmus Hungaricus, Peacock Variations)
The finale goes with an exhilarating swagger, and the balance between the trumpets and horns imitative block chords is well maintainied - Gramophone, August 1955 (Háry János)