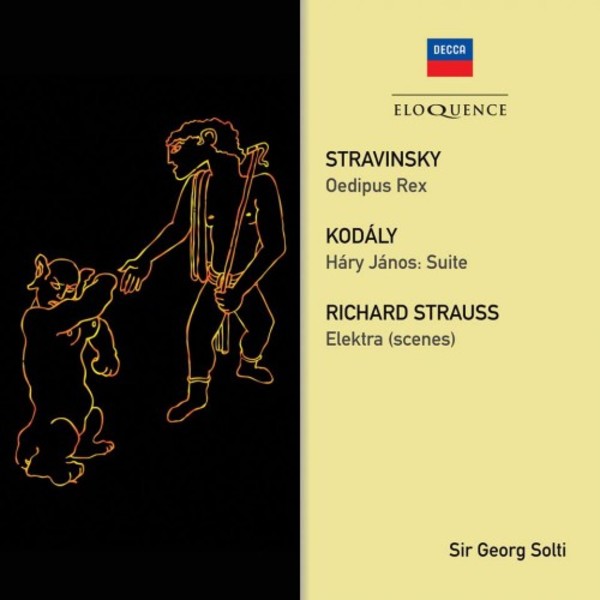 Both Strausss Elektra and Stravinskys Oedipus Rex trace their lineages back to Sophocles, the Greek dramatist who lived in the fourth century BC. Both are stories of the avenging of a royal fathers murder, either by surviving family members (Elektra), or by Fate or the gods themselves (Oedipus Rex).

Even from an early age, Georg Solti knew that his greatest ambitions lay in the opera house. From a purely musical point of view, working closely with singers teaches you to make music in a way that breathes  even in purely instrumental music, Solti once remarked. In his youth, Solti assisted Bruno Walter, Issay Dobrowen, Fritz Busch and Erich Kleiber. In Salzburg, in 1937, he was rehearsal pianist for Arturo Toscanini. So, by the time he came to conducting his first opera (Mozarts Le nozze di Figaro) at the age of 26, he knew the ropes, so to speak. According to him, to play rhythmically but softly, so that the singers always feel the pulse but need not tire their voices was a crucial factor in being a repetiteur. He continued, dont play all the notes, but play all the essential notes; when you are coaching an individual singer in a role, take the lead, but when you are playing for a staging or ensemble rehearsal, follow  follow for dear life! I was able to follow the worst singer to hell and back. I could have followed a birds chirping.

Exclusively a Decca recording artist (apart from a few recordings made for Deutsche Grammophon, RCA and CBS by arrangement with Decca), he made more than 250 recordings for the company over a 50-year period: 19471997, taking in music from Bach to Tippett. The three excerpts from Elektra (amounting to nearly half the complete opera) are particularly fascinating as this was an opera Solti conducted throughout his career and which he later recorded in its entirety in Vienna in the 1960s with the incomparable Birgit Nilsson in the title-role. Even in this group of three scenes all the essential Solti characteristics are in evidence: tremendous rhythmic drive and an acute ear for orchestral colour and detail.

the dark sobriety and essentially lyric qualities of Stravinskys opera-oratorio are freshly and memorably conveyed in this recording - (Stravinsky) Gramophone, February 1978