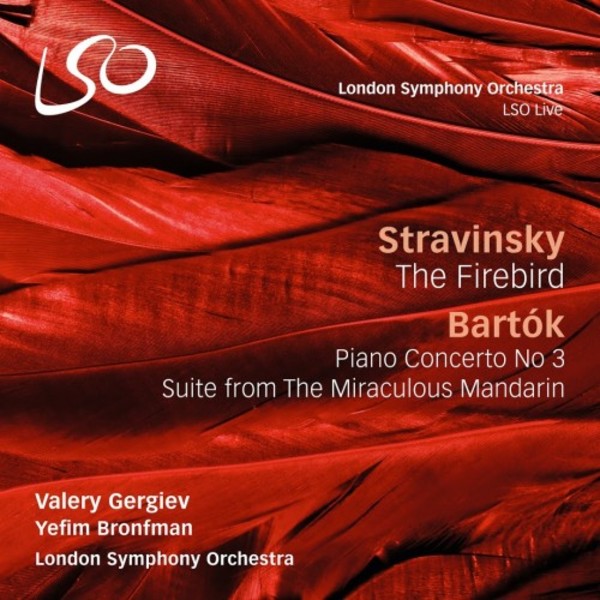 On 24 October 2015 at the New Jersey Performing Arts Center, Valery Gergiev took to the rostrum for his penultimate concert as Principal Conductor of the London Symphony Orchestra. An explosive programme of Stravinsky, Bartók and Prokofiev - repertoire that always fires Gergievs imagination - this live recording captures a major milestone in the Orchestras history. The first LSO Live release made outside of the Orchestras Barbican home, it showcases the very best music-making that Gergiev and the LSO can produce.

Stravinskys Firebird was an instant hit with audience and critics alike at its 1910 premiere, and it is a constant in Gergievs repertoire.

The Piano Concerto No.3 is Bartóks final work, completed only four days before he succumbed to a long battle with leukaemia. The New York Times found Yefim Bronfmans interpretation of Piano Concerto No.3 brilliantly charismatic and he is an acknowledged master of the great Hungarians music, winning a Grammy award for his 2009 recording of all three Bartók Piano Concertos.

A story of prostitution and violence, The Miraculous Mandarin, performed here in the suite version, is dramatic, mysterious and sinister. Incredibly entertaining, its now one of Bartóks most well-known works and never fails to lure the listener into a deep, dark world of seduction and horror. The LSOs performance of the work on tour was met with critical acclaim.

Closing the album is the encore from the concert, excerpts from Prokofievs incredibly popular ballet Romeo & Juliet. That Gergiev chose this work to close his farewell concerts is not surprising, as the music and its composer have special signficance for the conductor and for the LSO. 2016 sees the world mark the 125th anniversary of Prokofievs birth and Gergiev has long been a champion of the great Russians music. His award-winning recording of the complete score on LSO Live is among the best-selling on the label, winning BBC Music Magazine Best Orchestral recording of 2011.

an outstanding performance of the complete Firebird ballet. Gergiev, hands constantly aflutter, brought even the most insignificant transition passages to vivid life. - The Guardian

Gergiev clearly adores this piece, and put his whole soul into the performance. - The Telegraph

The concert was the last in a series pairing Bartók with Stravinsky, composers Gergiev has always done well. He opened with the suite from The Miraculous Mandarin its dark sonorities and rhythmic complexities superbly judged. - The Guardian