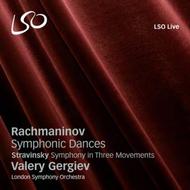 An orchestral suite in three sections, the 'Symphonic Dances' were the last works Rachmaninov completed and proved to be some of his most popular. Although rarely sentimental, they draw on folk idioms and the composers reminiscences of Russia, from where he emigrated in 1917.

Stravinskys 'Symphony in Three Movements' was written between 1942 and 1945, and was the first work Stravinsky completed after his arrival in the USA. Although he claimed it was a War Symphony, his true inspiration was typically vague.

Concert Reviews:
"the full force of the LSO sound was unleashed in Rachmaninovs orchestral showpiece - and last work - Symphonic Dances. With a sweeping string sound and piercing brass, Gergiev brought a cleverly programmed concert to a triumphant end" - Daily Telegraph

"Gergiev was on natural territory in Stravinskys Symphony in Three Movements, a piece often restrained by an objective approach that stresses its neoclassical credentials, but which was presented here with enriched colours and an almost violent attack that linked it convincingly back to the primitivism of The Rite of Spring...Gergievs upfront delivery of its striking ideas and dark fantastical manner was impeccably assured" - The Guardian

"In the late romanticism of Rachmaninovs Symphonic Dances, Gergiev was again dark and brooding this repertoire is second nature to him and the LSO seems to have adapted to breathing the same headily exotic air" - Financial Times