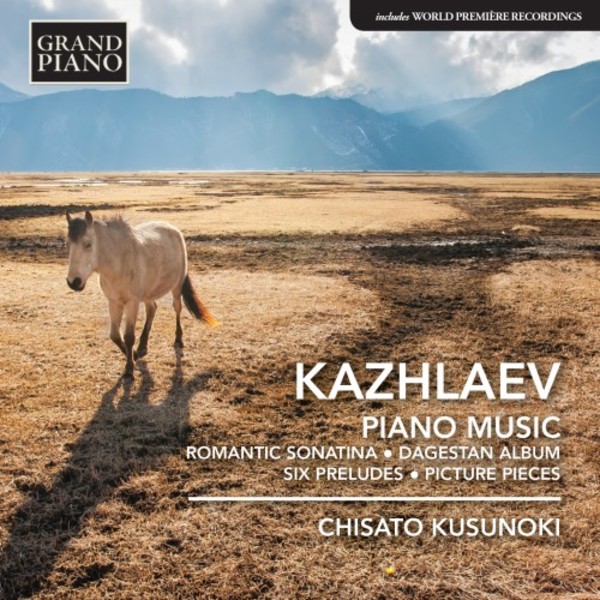 This recording charts a two-decade period in the musical life of the eminent Azerbaijani composer, teacher and conductor, Murad Kazhlaev. He has always written with idiomatic flair for his own instrument, the piano, from the early Romantic Sonatina to the beautiful, vocalised folk themes that make up the Dagestan Album. His nonchalant wit can be savoured in Picture Pieces whilst expressive beauty permeates the Six Preludes.

Chisato Kusunokis style of playing reflects her interest and study of pianists such as Ignaz Friedman and Benno Moiseiwitsch. Born in Germany, she read music at University College, Oxford, where she graduated with the prestigious Gibbs Prize in performance. Thereafter she completed her postgraduate performance diploma with a distinction at the Royal Academy of Music. She studied with Nicholas Austin and Hamish Milne and has also worked with Dmitri Bashkirov, Alexander Satz, Rosalyn Tureck and Ronald Stevenson. Chisato Kusunoki performs regularly in many of the worlds finest venues and concert series, both in recital and with orchestra including Sumida Triphony Hall, Victoria Concert Hall and Wigmore Hall. She has also toured extensively in Germany, Russia, Ukraine, the Caucasus and the Far East. She has made a particular study of Medtner and Kazhlaevs music, and was invited by Murad Kazhlaev to his birthplace, Baku, where she gave a concert at the Azerbaijan State Philharmonic Hall. She then travelled with him and his wife to their family homeland, Makhachkala. Whilst there she played at the Makhachkala Murad Kazhlaev School of Music for Talented Children (founded by the composer) and at the Makhachkala Philharmonic Hall. Chisato Kusunoki has given further concerts of Kazhlaevs music in Moscow and their friendship continues to this day.