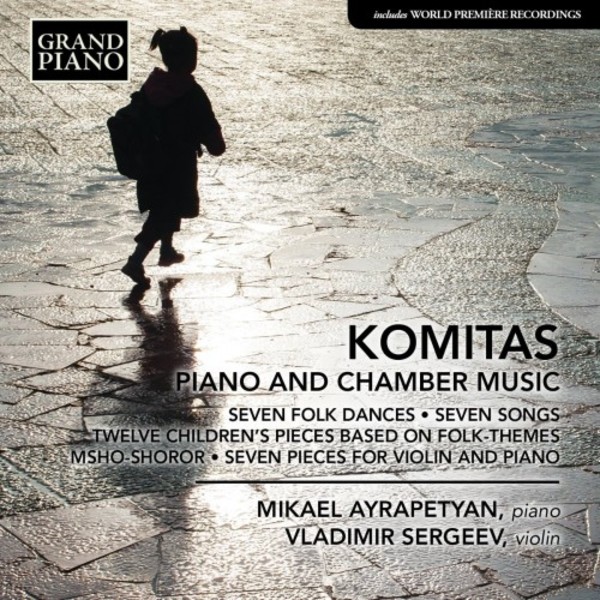 Komitas was one of the first Armenian musicians to undergo classical Western musical training, in Berlin, in addition to music education in his own country. He published both folksong collections and writings on Armenian church melodies, and his work laid the foundations for the development of a clearly defined national musical style. The Seven Folk Dances evoke the specific timbres of Armenian instruments, the Seven Songs for Piano are fleeting and lyrical while the Twelve Childrens Pieces based on folk-themes are beautifully crisp. Msho-Shoror is one of the most ancient of all Armenian dances.

Mikael Ayrapetyan was born in 1984 in Yerevan, Armenia, where he had his early schooling. His repertoire ranges from the baroque to the contemporary and includes rarely performed works of Armenian composers, whose music had not until then been performed. He is actively engaged in the popularisation of Armenian classical music, organising concerts in major concerthalls of the world, and acting as producer, art director and pianist for these performances. Mikael Ayrapetyans previous recordings for Grand Piano of piano works by Abramian and Bagdasarian were met with critical acclaim.

Vladimir Sergeev was born in 1985 in Yaroslavl and started to learn the violin at the age of six. In 1996 he won his first prize in a regional competition for young violinists and in 2000 entered the Academic Music College of the Moscow Tchaikovsky State Conservatory as a student of Peoples Artist of Georgia M.L. Yashvili. He was also trained by Yashvili at the Moscow Conservatory from 2004 to 2009, and in postgraduate studies until 2012. During his training, he became a laureate of the All-Russian competitions of Belgorod (1999) and Ryazan (2000) and in 2009 won the international St Petersburg competition.