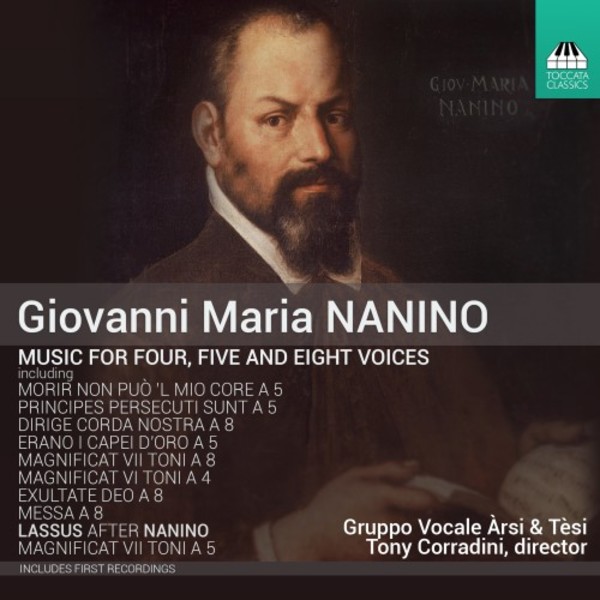 Magnificat VII toni (after Nanino 'Erano i capei d'oro') a 5

Magnificat VII toni (after Nanino 'Erano i capei d'oro') a 5

Giovanni Maria Nanino (15441607) was one of the major Italian composers of late-Renaissance polyphony. A successor of Palestrina as maestro di cappella at Santa Maria Maggiore in Rome, Nanino produced a modest but expertly crafted body of sacred music, and his madrigals, too, enjoyed widespread popularity.

He also became the most influential teacher of composition in late-sixteenth-century Rome. Despite the prestige he enjoyed in his own day, his music has been almost entirely forgotten.

This recording  the first to be dedicated to his music  reveals it to have struck a remarkable balance between beauty, passion and dignity, between darkness and light. The material for the recording was prepared by the leading authority on Naninos music, Maurizio Pastori, and the scores he has edited will shortly be published by Toccata Press.

The Gruppo Vocale Àrsi & Tèsi devotes itself to the performance of sacred and secular polyphonic music, with a repertoire focused chiefly on the sixteenth and early seventeenth centuries. It performs with one singer per part, and occasionally includes some instrumentalists. The ensemble is conducted by Tony Corradini, who sings bass with the group.