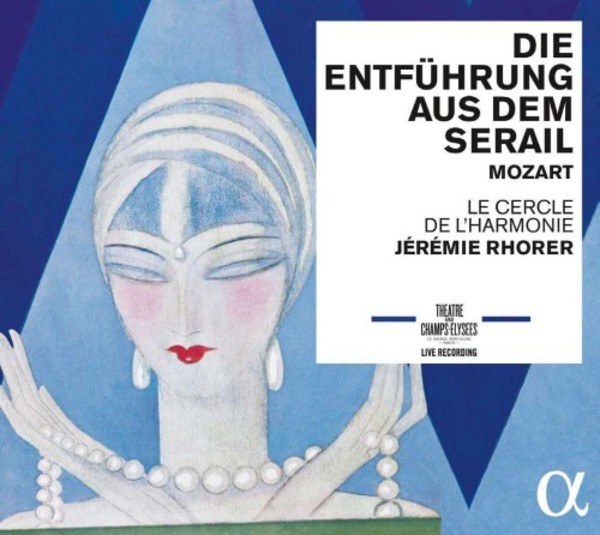 The conductor Jérémie Rhorer is today regarded as one of the finest interpreters of the music of Mozart in general and his operas in particular. After conducting Die Entführung aus dem Serail at the Festival dAix-en-Provence in 2015, he performed it again at a memorable concert at the Théâtre des Champs-Élysées in Paris in September of that year with his orchestra, Le Cercle de lHarmonie. It is this exceptional event, captured in a live recording conveying all the dramatic intensity of the opera, that we present today.

In Die Entführung, Mozart presents a completely unprecedented vision of the singspiel, with highly developed ensembles and musical continuity at a time when contemporary spectators were expecting the standard alternation between spoken and sung sections, says Jérémie Rhorer in the interview that accompanies the discs. That musical dramaturgy lies at the centre of this interpretation, which is served by an outstandingly homogeneous cast.

This recording launches a series of recordings of concerts at the Théâtre des Champs-Élysées and a collaboration between Alpha Classics and Le Cercle de lHarmonie, who will continue to place their excellence at the service of the great masterpieces of Mozart  and of other composers: watch this space!

Although performances of Mozart's 1783 Singspiel these days are outnumbered by those of his opere serie, ldomeneo and La Clemenza di Tito, this is the third recording I've been sent in 12 months. Unlike Rene Jacobs's Berlin studio recording for Harmonia Mundi or Yannick Nezet-Seguin's "patched" live version from Baden-Baden (DG), this is a straight concert performance from a radio broadcast. The downside is a demonstrative audience, but Rohrer's way with the music is so invigorating  like Jacobs, he uses period instruments, which highlight Mozart's "Turkish" orchestration  that there are compensations aplenty. His cast mostly equals or even surpasses the rival sets:  Norman Reinhardt's plangent lyrical Belmonte is more of a stylist  than DG's Rolando Villazon, while Jane Archibald's tone falls more easily on the ear than Diana Damrau's (DG).  Mishca Shelomianski is a ripely humorous Osmin equal to the role's technical demands, and David Portillo a fearless Pedrillo. Only Rachele Gilmore's foggy diction as Blonde lets the side down, but the set sparkles.  Hugh Canning (Classical Album of the Week)
The Sunday Times 3 July 2016

The cast is pretty appealing (David Portillo as Pedrillo, Norman Reinhardt as Belmonte, Rachele Gilmore as Blonde, Jane Archibald as a radiant Konstanze) and attacks ensembles with vigour and arias with the kind of breezy elegance that makes easy work of fiendish stuff. But with two other major versions of Entführung out last year from René Jacobs and Yannick Nézet-Séguin, what the young conductor Jérémie Rhorer really offers is a whole lot of orchestral charisma: an overture full of bounce and clatter, pacey tempos that fizz but also breathe, textures that are bright and fibrous, a delivery that is happily slapdash without getting messy.  Kate Molleson
The Guardian 29 July 2016