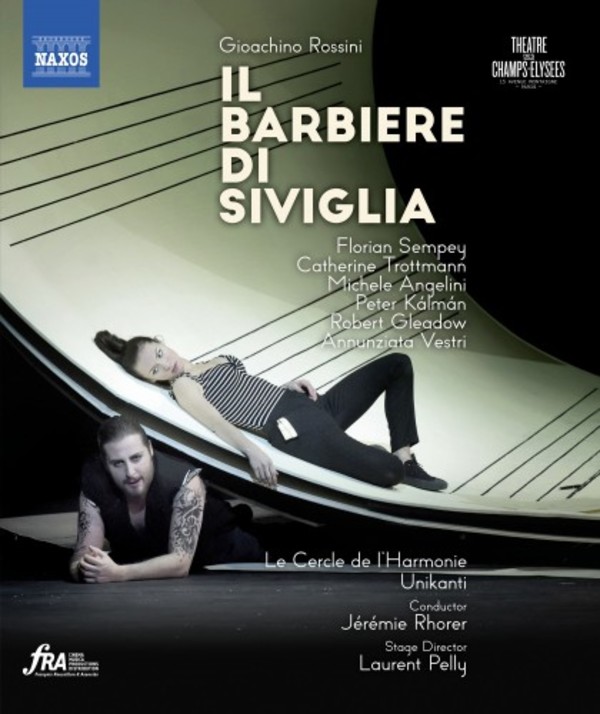 Rossinis comic masterpiece was based on Pierre-Augustin Caron de Beaumarchaiss French play Le Barbier de Séville and is the ultimate opera buffa. The score is a compendium of the composers wittiest and most brilliant writing, and includes the famous entrance aria Largo al factotum and a raft of superbly dynamic ensembles. This vibrant and youthful production features Florian Sempey, one of the worlds best Figaros, the Rossini tenor Michele Angelini, vivacious and critically admired Catherine Trottmann, and the award-winning team of acclaimed director Laurent Pelly and conductor Jérémie Rhorer who directs his spirited period ensemble Le Cercle de lHarmonie.

This 2017 Théâtre des Champs-Élysées production of one of Rossinis most popular operas is staged by the director Laurent Pelly, whos also sought-after for his remarkable set and costume designs. The Guardian gave the production 4 stars and commented: the staging provide an excellent backdrop for a pleasingly physical performance from a youthful, engaging cast  the strength of this production is its success as an ensemble piece, like a fast-paced farce where sharp timing and interaction between the performers is everything.

Seen and Heard International praised the musical aspects of the production: the musical side of things was so strong. The production was conceived for Jérémie Rhorers period band Le Cercle de lHarmonie, which perhaps explains the musical emphasis, and theyre worth it for the early 19th century attention that they bring to the sound. Its pungent, focused, and often very surprising, but never less than beautiful and often very sweet, such as the delightful clarinet in Ecco ridente in cielo. Rhorers direction was brilliantly paced throughout, with a fondness for fast tempi that fitted the dramas rapid pace very well.

The lead role was portrayed by baritone Florian Sempey, who made the opera a focus of his dynamic career. He has played Figaro in some of the worlds most prestigious stages, including the Royal Opera House, Covent Garden, Teatro dellOpera di Roma and Opéra National de Paris. According to Opera Today, Sempey succeeded in bringing perfect Rossinian spirit to this comic hero. Mr. Sempey has facile, graceful movement on stage, and facile command of Rossinis vocal requirements, singing in strongly focused, beautiful tone. Mezzo-soprano Catherine Trottmanns Rosina was also praised by Bachtrack: Catherine Trottmanns youthful Rosina with her strong rich mezzo captured the balance of vulnerable ward and feisty young lady, appearing high up on her balcony within the staves, dodging the hazardous opening and shutting doors as fierce as Symplegades clashing rocks.

Laurent Pellys staging of LÉtoile by Chabrier, at the Dutch National Opera, is available on 2110595 (DVD) and NBD0091V (Blu-ray). It received a Diamant award from Opéra (France) and a Diapason dOr: A dreamcast for a show on which blows a gentle wind of madness à la Prévert: LEtoile, the opera buffa of Chabrier, finally finds its video version.

It took a Paris-born theatre director of genius, Jean-Pierre Ponnelle, to give us the definitive filmed staging of the Beaumarchais-Rossini Il barbiere di Siviglia. And it has taken another Paris born theatre director of genius, Laurent Pelly, to strip out the operas 18th-century setting and reveal the wonder of the modernist comedy that lies beneath. ... Given that Pelly works with players of quality, while ensuring that the productions every detail is of a piece with itself, its not surprising that this is a wonderfully well-acted Il barbiere ... The final salute, however, must go to Jérémie Rhorer and the period instrumentalists of his Le Cercle de lHarmonie. Rhorer looks younger than his 46 years, but premier cru wines are not made overnight and this, by any measure, is premier cru conducting. ... My, what skills are on display in every department of this astonishing production!  Richard Osborne
Gramophone December 2019