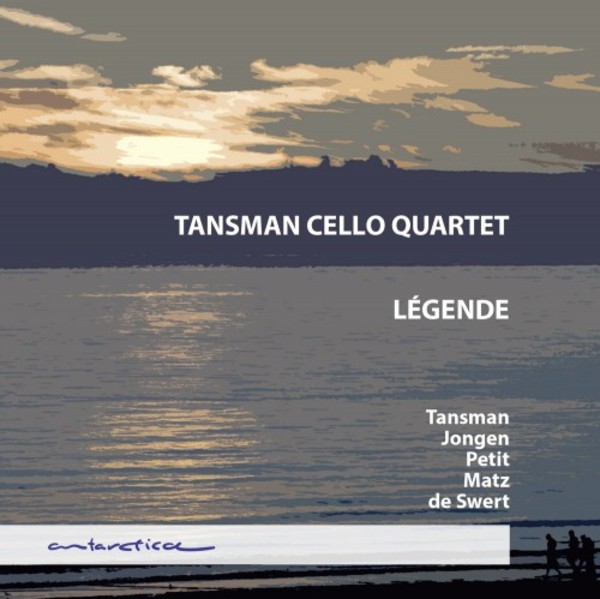 The repertoire for cello quartet is not large. It does, nevertheless, include some jewels which deserve to be discovered. The Tansman Cello Quartet present here a few of them for you to enjoy.

The ensemble takes its name from the Polish composer Alexandre Tansman (Lodz 1897  Paris 1986). Tansman started composing at the age of 8. He had piano and composition lessons in his home town and later studied Law in Warsaw, while continuing his studies in counterpoint and composition at the conservatory. From 1919 his career developed in Paris, and it was from here that he discovered the world. He became friends with Charlie Chaplin, George Gershwin, Maurice Ravel and many others. Tansman composed more than 300 works for diverse groups and ensembles. He is considered to be a Neoclassicist, turning his back on Romanticism, and preferring order, clarity and sobriety. His Two movements for Four Cellos dates from 1935, and was played in that same year in Brussels as a world premiere.

Joseph Jongen (Liège 1873  Sart-les-Spa 1953) was an organist and composer. He followed the complete course of study at the Conservatory of Liège where he went on to teach harmony and counterpoint. In 1897, Joseph Jongen won the Belgian Prix de Rome. From that moment on, his work became widely known. He composed hundreds of pieces, particularly chamber music. From 1920, he taught fugue at the Brussels Conservatory, where he was Director from 1925 to 1939. It was during this period, and more precisely in 1929, that he composed his Two Pieces for Cello Quartet. Jongens work is firmly anchored in the Post-Romantic and Impressionist periods, though this in no way prevented him from developing his own very personal style.

The Frenchman Pierre Petit (Poitiers 1922  Paris 2000) studied composition at the Paris Conservatory with Georges Dandelot, Nadia Boulanger and Henri Busser. His Suite for Four Cellos, written in 1942, revealed a composer of a certain maturity. He was not afraid of taking liberties with harmony, in particular in the penetrating adagio, proving that he could master the technical and musical potential of the cello. Four years later, Petit won the Prix de Rome for his cantata 'Le jeu de lamour et du hazard'. In 1965, he was awarded the Grand Prix du Conseil Général de la Seine for his work and in 1985 he received the Grand Prix from the SACEM (Société des auteurs et compositeurs). Pierre Petit was director of the Alfred Cortot Ecole Normale de Musique for 35 years and also produced musical programmes for French television.

Rudolf Matz (Zagreb 1901  Zagreb 1988) played an important role in the musical life of his home town. As a composer, cellist and conductor he combined these three facets in his 'First Years of the Cello', the six volumes of which were published between 1948 and 1962 and which some consider to be the best work for learning the cello since Duports 'Essai sur le doigté du violoncelle' from 1806. Among the hundreds of other compositions by Matz, is the Cello Quartet in D minor published in 1966. In this piece, Matz subtly revisits themes from other illustrious predecessors.

Jules de Swert (Louvain 1843 - Ostende 1891) was an important representative of the Belgian school of cellists. From 1857 he was a pupil of François Servais, known as the 'Paganini of the cello', at the Brussels Conservatory. He was awarded a Premier Prix there in 1859. He went on to hold top posts as soloist or konzertmeister in Dusseldorf, Weimar, Berlin and Vienna. De Swert composed two cello concertos and numerous fantasies for cello and chamber ensembles. His Pensée Elégiaque was dedicated to the oldest son of François Servais, Joseph, also a famous virtuoso cellist, after his death in 1885. The atmosphere of this piece is one of meditative serenity.