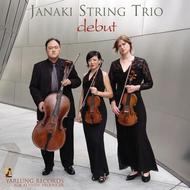 Duet for violin and viola

Duet for violin and viola

"...extremes of brashness and beauty, and demand an interpretive flexibility to make the transitions plausible. The Janaki players have that in spades, and they use it to even more striking effect in Beethovens early C minor Trio (Op. 9, No. 3), which they play with sharply chiselled accents and a broad dynamic sweep that make it sound almost contemporary at times. They also move easily between the frenetic and dolorously lyrical sections of Jason Barabbas String Trio. But the ensembles strongest quality is its energy, particularly that of its cellist, Arnold Choi, whose rich tone and muscular style are the groups backbone. His colleagues  Serena McKinney, violinist, and Katie Kadarauch, violist  are a counterweight to his sound. On their own, in David Lefkowitzs dark, meditative Duet for Violin and Viola, the women produce a comparatively gentle, transparent sound. Coming just before the second Penderecki performance, the Lefkowitz is also a moment of fragility, which Mr. Pendereckis pounding chords sweep away with no mercy." - Allan Kozinn (The New York Times)

"The Janaki Trio is on a path towards greatness. Their individual gifts are already astounding, but in their musical union is found something of immeasurable treasure...."  Violist Paul Coletti